The brand new HP Spectre laptop is a 13.3-inch ultrabook that is designed to give a straight and touch competition to Apple’s popular MacBook Air and 12-inch MacBook, in terms of overall performance and design both. 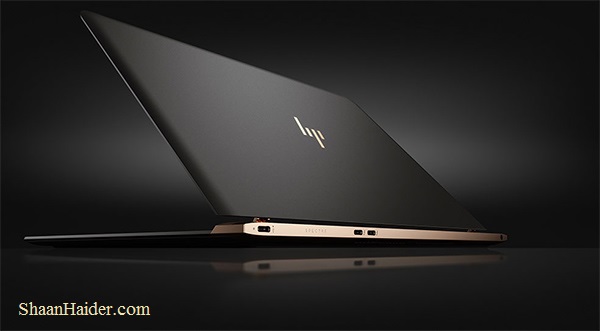 If we compare the HP Spectre with some of the lightest and thinnest laptops available in the market, even though the Lenovo LaVie currently holds the title of being the world’s lightest laptop but it comes with a thickness of 17mm just like Apple’s MacBook Air. Also, the new 12-inch MacBook, along with the Razor Blade Stealth, both offer a thickness of 13mm.

And the good news here is that the thickness of HP Spectre is just 10.4mm. Talking about the total weight of HP Spectre, it is just 2.45 pounds thanks to a carbon fiber material used to provide a tough and lightweight shell. There are four hybrid polymer battery cells are distributed throughout the HP Spectre to maximize the battery capacity in its ultra-thin design.

- Intel Sixth-Generation Core i5 or i7 Processors

So far there is no information provided regarding the price and availability of HP Spectre in international market. But we are expecting it to be available soon as it is really going to be a great demand.