Samsung Galaxy S7 and S7 Edge are the latest Samsung flagship devices but Samsung is also going to launch lots of new smartphones in the mid-range segments of Galaxy series and there are already leaks and images coming out for those products.

Samsung Galaxy C5 (SM-C5000) is the upcoming mid-range from Samsung and the information regarding the hardware specs has leaked in GFXBench benchmarking app showing most of the specifications and features of Samsung Galaxy C5. 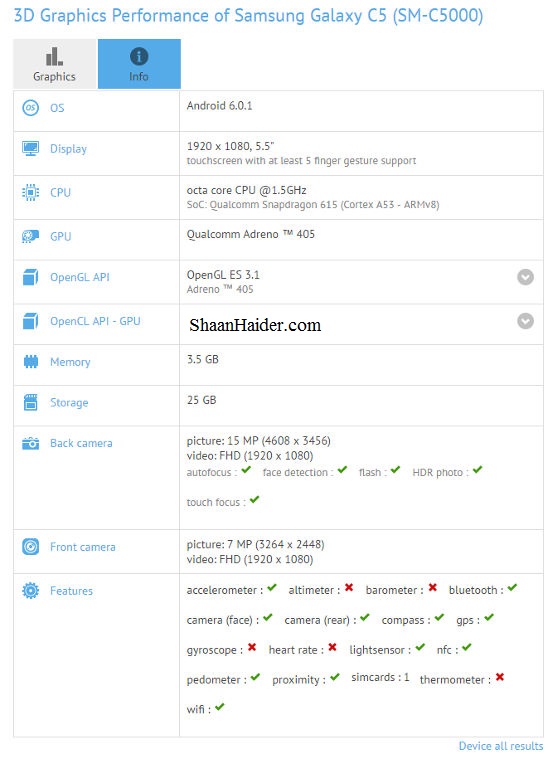 According to leaked specs on leaked in GFXBench benchmarking app, Samsung Galaxy C5 comes with a Qualcomm Snapdragon 617 processor and packs 4GB of RAM as the specs revealed in the Geekbench listing.

Interestingly pictures of cases to protect the back of Samsung Galaxy C5 have also surfaced, clearly showing the design of the smartphone. It is visible in the images that the loudspeaker of the Samsung Galaxy C5 is placed on the bottom, along with earpiece and USB port.

The 3.5mm audio jack is provided on the top. The SIM card slot and microSD card slot is present on the left, and the power and volume buttons are on the right side of the device.

Below is the list of all the rumored and leaked hardware specs and features of Samsung Galaxy C5 (SM-C5000) compiled together.

But so far these are just leaked and rumored specs of Samsung Galaxy C5 smartphone and we will come to know how many of them are true only after the official launching of the smartphone.