HOW TO : Upload Video as Your Facebook Profile Picture

Facebook announced long time back they are going to include a new feature of using video as your Facebook profile image. It received positive and negative both feedback from people.

And now finally, video profile pic are live on Facebook. This feature is currently available for Facebook smartphone app only. So you will have to upload Facebook profile video from your smartphone only, not from the web browser.

HOW TO : Sync Facebook Birthdays with Google Calendar to Get Birthday Reminders

3. Tap on the "Edit" icon at the bottom right of your profile picture.

4. Tap on "Take a New Profile Video" option to record a new video from your smartphone's camera to put as your Facebook profile video. Or tap on the "Select Profile Video" to select an existing video as shown in the below image. 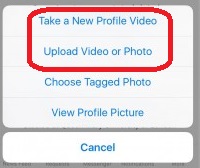 5. Once the video is recorded or selected, tap on the "Next" button.

6. Select the thumbnail from the video to appear as a static image where needed using the slider provided. Once thumbnail is selected, tap on "Use" button.

7. Now, your Facebook profile video is uploaded and you should be able to see it on your profile.

Currently Facebook profile video is not available to all Facebook accounts. It is slowly rolling out and you will get it sooner or later too.