360-Degree Photos are pretty common on smartphones. Android came with this feature few years back and now you can find it on most of the high-end Android smartphones. So it totally make sense to integrate this feature on social media where people just love to share the images and videos they have taken.

Google Plus is already having the feature of 360-degree images since a long time and now Facebook, the biggest social networking site in the world, has also announced the support for 360-degree images on its feed. Sounds great, right? 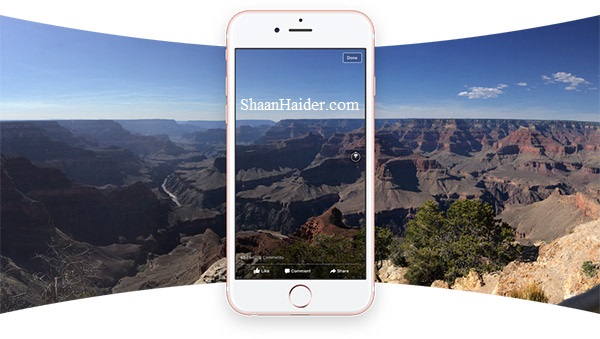 This small guide is divided in two parts. First part is how to post 360-degree images on Facebook and second part covers the method to view those images.

1. Capture a panoramic image on your iOS device or Samsung Galaxy smartphone or just capture a 36o-degree photo using a 36o camera or 36o photo app.

3. Upload the 360-degree image you have just taken and share it as you would any other photo.

So basically you need to tap the status tool from the top of your Timeline or News Feed and then select the Photo/Video option. After that choose the 360-degree photo you want to share on Facebook, and then tap on Post.

HOW TO : View 360-Degree Photos on Facebook and in Virtual Reality

1. To view a 360-degree photo posted on your Facebook Timeline or News Feed, look for the images marked with the compass icon.

2. Tap on the 360-degree photos 360-degree to view it in full screen. You can see them in 360-degree view by moving your phone or dragging the images with your finger.

3. On Samsung Gear VR-compatible smartphones, you will find a new option in the form of a button on the top left corner of your photo that says "View in VR."

4. Tap on this button and insert your Samsung smartphone into your Gear VR headset to see your 36o-degree photos on Facebook in virtual reality.

Posted by Shaan Haider
Categories : Facebook, How To :, Social Networking