Thin is what desired when it comes to gadget like smartphones, tablets and laptops. So far Apple Macbooks were considered the slimmest laptops available but Acer has just announced a notebook Acer Swift 7 at the IFA 2016 in Berlin that is less than 10 mm in thickness and weighs just 1.1 kg.

Acer Swift 7 comes with an all-aluminum uni-body, 13.3-inch Full HD IPS display with 1920 x 1080 pixels resolution, a micro-bezel and comes with Corning Gorilla Glass protection as well. It is powered by the 7th Generation Intel Core i5 processor and comes with 8GB of RAM and 256 GB of storage. 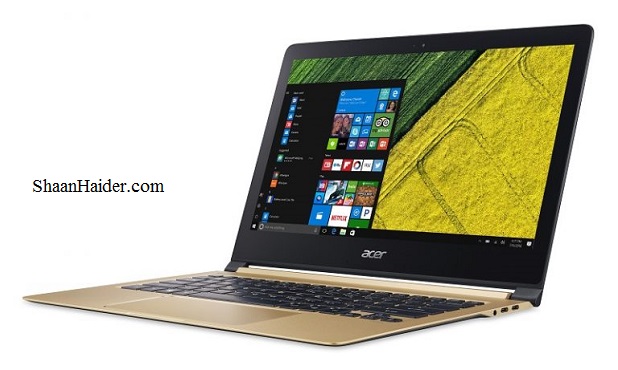 It runs on the Windows 10 OS. And on the connectivity side, Acer Swift 7 sports two USB Type-C ports on-board and an HDR-enabled webcam.

Acer Swift 7 notebook will be available in China in September itself with prices starting at ¥6,999. In North America and EMEA region it will be available in October and the starting price of Acer Swift 7 will be $999 and €1,299 respectively.
Along with the Swift 7, Acer has also announced Swift 5, Swift 3 and Swift 1 Ultra Windows 10 notebooks. Acer Swift 5 and Swift 3 notebooks both are having the metal chassis and are powered by 7th generation Intel Core processors like the Swift 7.

Being the most low-end model in the recently launched Acer Swift series of notebooks, Acer Swift 1 comes with a 14-inch HD display, an Intel Pentium or Celeron processor and 4GB of RAM. User will have the option to select the one from 32GB, 64GB or 128GB memory. Acer Swift 1 is 17.9mm thick and weighs 1.6 kg.