There's Only One Month Left to Claim Your Free Windows 10 Upgrade! Here's Why You Should Upgrade to Windows 10 Right Now

It has been quite a long time since the Windows 10 was released officially for PC’s on July 29th last year. Earlier the official release Microsoft clearly stated that, the upgrade will be free for all Windows 7, Windows 8 and Windows 8.1 devices regardless it is a pirated or a genuine copy. But but wait! As many of you already know, the upgrade will be free only till the first year of the official launch.

THE JOURNEY OF WINDOWS 10 SO FAR

In between this 11 months’ time period Microsoft has updated the operating system many times with new builds which contained UI refreshments, stability and performance improvements and also bug fixes. 300 million people have already upgraded to Windows.

But there’s still a large number of people around the globe who are using Microsoft’s older operating systems and are confused whether to upgrade to Windows 10 or they should use their current primary operating system, Well to clear this confusion, I’m writing this article and I hope it will be able to help you. So, let’s start…here's a few reasons to grab the free Windows 10 upgrade till it's free! 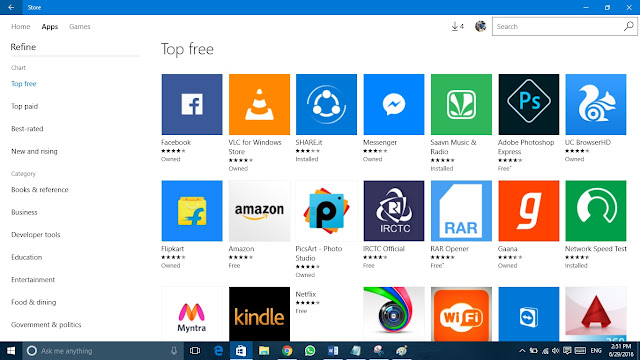 With Windows 10 installed on your PC you get access to thousands of universal apps, which can help you in many ways. The new universal app system is great and can sync data between your phone (Windows Phone only) and PC. As a consumer the feature which I like most of universal app is when you buy an app through your phone, at the same time you also acquire the app for PC too and vice versa.

The class of apps which are used in universal apps make this happen and for the developers it is now more easy to make an app for both phone and PC as both the apps now share up to 80% of same codes, so it’s a lot easier and cheaper now.

One of my favorite Windows 10 universal apps are the new Facebook and Messenger apps. Other than those, there are Tubecast, Groove Music, Skype and a few more, for example, earlier I used the Facebook Web on my PC but now Facebook App is helping me to get rid of that and also the new messenger app is useful too. 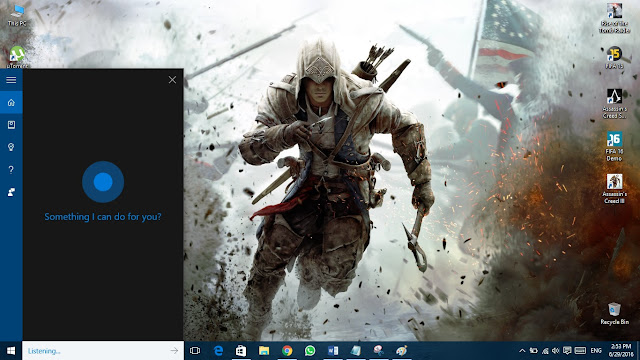 Remember the Build 2014 event? When Cortana launched for Windows Phone 8.1 devices? Yes, your personal assistant Cortana  is now on Windows 10 too and not only that Cortana is a lot smarter now. Through the search box beside the start button you can now command, ask or search anything with the help of Cortana.

The best part about Cortana is it is always synced with your phone. If your phone has Cortana you can send text messages directly from your PC using Cortana, Cortana on your PC also notifies you about the missed calls on your phones and not only that you can also add a reminder on your PC and get that on your phone too (and vice versa).


DIRECTX 12 – A BLESSING FOR THE PC GAMERS 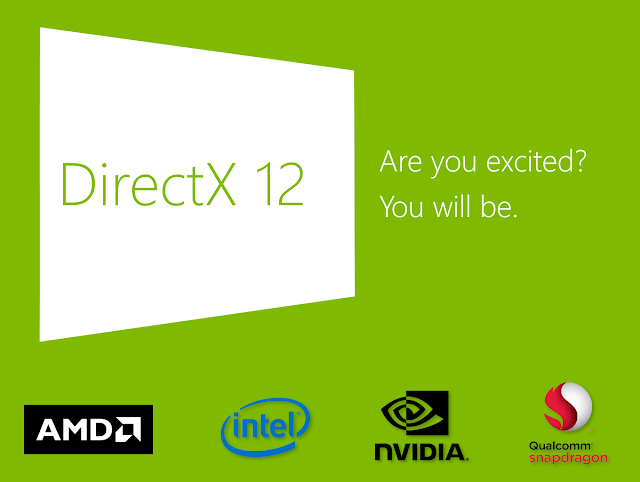 With DirectX 12, PC gamers get another new feature update which enhances their gaming experiences. According to Intel and Microsoft DirectX 12 can help GPU’s save 50% or more power at times and also get better performance which gives more FPS counts for DirectX 12 enabled games. Well, to use DirectX 12 you will also need a DirectX 12 enabled, most GPU launched in the recent times support DirectX 12.

For your info, in a test Battlefield 4 performed 58% better with DirectX 12 than DirectX 11, almost same numbers of performance boost was noticed with Rise of the Tomb Raider too. So, if you are a serious gamer and haven’t upgraded to Windows 10 yet, this is the time.


FREE UPDATES FOR REST OF THE LIFE 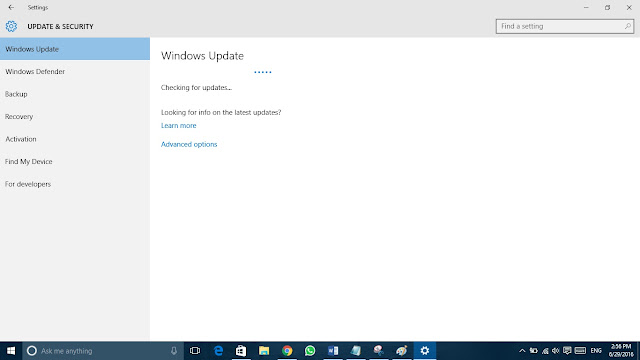 Microsoft introduced Windows 10 as a service and yes! If you remember, they also said Windows 10 will be the last version of Windows. So what does it mean? It means, without making a new operating system in every 4-5 years with new features they will be pushing new features through updates of Windows 10.

For example, Windows 10 was released in last year’s July and in this time period we got a very big update around November (which was named November Update) and another one the Windows 10 Anniversary update which is due in July this year will be coming soon. So this is what is Microsoft doing with ‘Windows as a service’ without making another new operating system they are pushing the updates in the existing Windows 10 for free 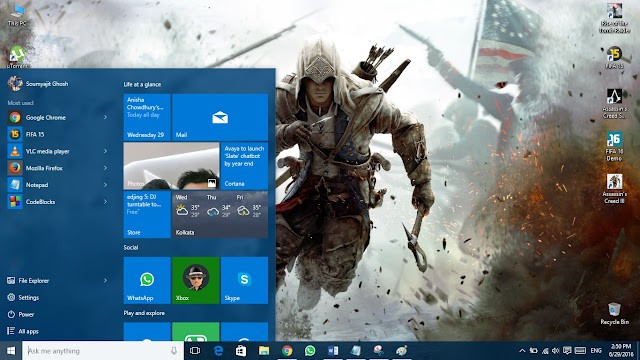 When Windows 8 was released back in 2012 Microsoft removed a lot of features which users liked on Windows 7, they removed the Start button (however which came back with Windows 8.1), they changed the start menu, glass like Windows Aero effects and more. But now, with Windows 10, we have the ability to use the Start Menu like the old Windows 7 or even like Windows 8/8.1 (in tablet mode), there’s the transparent glass like Windows Aero effects are back. I personally like what Microsoft has done with Windows 10 as there’s the modern features of Windows 8’s start menu and also the best look of Windows 7’s start menu; both are combined in a beautiful manner.

Other than the start menu, there’s change in the Control Panel, for people who are not very familiar with Windows Control Panel was a bit complex but now Microsoft has the settings option which is simple and easy to use. Also I liked the fact that Microsoft didn’t removed the old control panel, I still find control panel useful with a lots of settings tweaks within it.

The Action Center is next in the list, with Action Center you can get the notifications from your Windows 10 apps and with single click (or touch) you can open the app and see them below. The quick toggles are also very useful, as it is now a lot easier and faster too connect to Wi-Fi, a Bluetooth enable device or project your screen to an external monitor with just a single tap or click. There’s also virtual desktops too, just like you get in a Mac OS X or Linux. 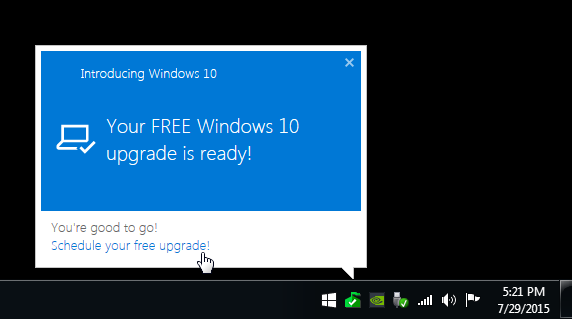 In this article I just wrote about the most important reasons why you should upgrade to Windows 10, well there’s a lot more just than this but it won’t be possible to write about everything in an article. And yes! There’s a few bugs too, it is impossible to make an Operating System without any bugs or problems but believe me the engineers of Microsoft are working hard and in this 11 months they have fixed most of the bugs.

With the Windows Insider programme they have taken it to a step forward and they are pre fixing the bugs in new builds, ahead of public release. Personally, I am using Windows 10 even before the public release (as a Windows Insider) and I’m quite happy and haven’t felt any performance issues in the recent times.

So, if you are still confused whether to hold on to Windows 7/ Windows 8.1, I would recommend you to give Windows 10 a try and if you don’t like Windows 10, you can revert back to your current Operating System within 30 days.

Have you upgraded to Windows 10? Let us know your thoughts in the comments below.