HOW TO : Enable Hidden Aero Lite Theme in Windows 8

Windows 8 is having lots of nice features and as claimed by the Microsoft, it is faster than the previous version of Windows. There are lots of small tweaks used by the developers to make Windows 8 faster in terms of performance.

One of them is the removal of the Aero Lite theme from the Windows 8. Aero Lite is a nice theme which was introduced in the Windows Vista to give a nice transparent effect called Aero Glass effect.

Using a small tweak, you can enable the Aero Lite theme on your Windows 8 operated computer. But keep in mind that though this trick is tried and tasted, you do it on your own risk and Geeky Stuffs will not be held responsible if anything goes wrong.

HOW TO : Get the Start Menu back in Windows 8

HOW TO : Enable Hidden Aero Lite Theme in Windows 8

1. Go to the C drive. Open the Windows folder. Now look for the Resources folder and open it. Click on the Theme folder to open it.

Alternatively just copy and paste the C:\Windows\Resources\Themes on your file explorer window and press the Enter key.

2. Now, copy the “aero.theme” file and paste it on the Desktop.

3. Right click on the aero.theme file and open it with Notepad. 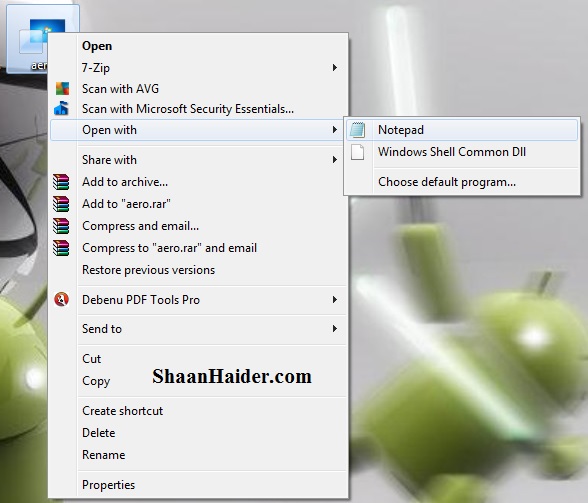 If the Notepad does not appear under the “Open With” option then click on the “Choose Default Program” and select the Notepad from the options given there.

4. In the fifth line of the file open in the Notepad, you will find the Display Name property. Change the text after “=” sign to AeroLite or whatever you want as shown in the below image.

5. Scroll down the texts in the Notepad and look for the [Visual Styles]. In the Path property, change the “Aero.msstyles” to “Aerolite.msstyles” as shown in the image below.

6. Now, save the Notepad file and put it back at the same folder from where you have copied it In the first step i.e C:\Windows\Resources\Themes

It will replace the original “aero.theme” file and you will need to have the administrative access to perform this task.

8. All themes available on your Windows 8 will appear on the screen now. Look at the Installed Theme sections and you will find the AeroLite theme there. The name of the theme will be exactly what you have given it in the 4th step above.


Posted by Shaan Haider
Categories : How To :, Windows