IFA 2016 is very close and nearly every brand is coming out with some teaser of their upcoming products and event invitations of their product launching events. We have already shared about Samsung's event in which it is going to launch the latest series of Samsung Gear S3 smartwatches.

And now ZTE's Nubia brand has started sending the media invites for the launching event of brand new smartphone at the IFA 2016 in Berlin on August 31st. The press invite comes with the tagline "Dream Without Boundaries" giving an idea about the launching of a bezel-less smartphone. And then there is another teaser of the same event that says"What’s NU at IFA 2016". 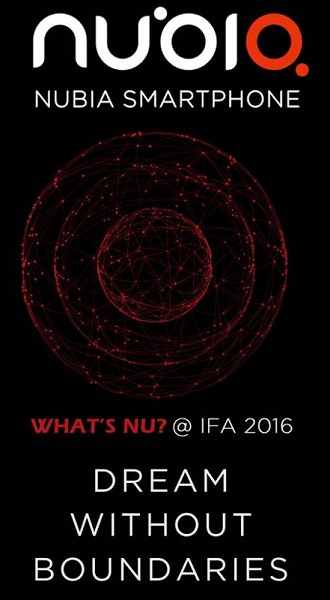 The last ZTE Nubia smartphone launched was the Nubia Z11 in June in China. Nubia Z11 comes with a 5.5-inch 1080p full HD screen with 2.5D curved glass and bezel-less display. Since Z11 is also a bezel-less smartphone, there is a probability that Nubia will be launching the Nubia Z11 at IFA 2016 for global market

The screen-to-body ratio of Nubia Z11 is impressively 81%. It is powered by a Qualcomm Snapdragon 820 quad-core processor and runs on Android 6.0 Marshmallow OS.

On the imaging side, it comes with a 16-megapixel primary camera with dual-tone dual LED flash, Phase-Detection Auto-Focus (PDAF) and Optical Image Stabilization (OIS). There is an 8-megapixel front-facing camera provided for selfie and video chatting.

So far it is not confirmed Nubia will launch the Z11 or any other brand new smartphone at the IFA 2016 event but we will find it out soon.