It was already known that Sony scheduled its IFA press conference for September 1st, 2016. And Sony has sent the official media invites today for the event. The invitations also includes a teaser showing lots of different Sony products expected to be announced at the event.

Sony press invitation teaser shows a TV, portable speaker, a Bluetooth headset of H.ear On series, an Xperia smartphone, action camera and a small colorful Walkman shaped gadget with a camera that could be related to Internet of Things and a PlayStation VR (PS VR) that is expected to be available globally from October. 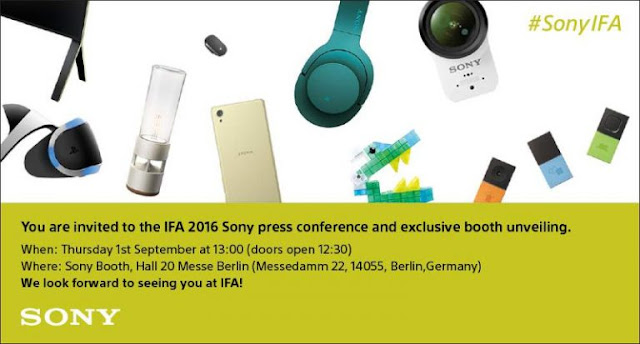 As we can see in the teaser image and was leaked earlier that Sony is expected to announce a new Xperia smartphone at the event. A new Xpera smartphone with model numbers F8331 and F8332 surfaced recently.

It is reported to come with a USB Type-C port and nearly similar hardware specifications as the Xperia X Performance but with a different design and looks.
So it is expected to come with Qualcomm MSM8996 Snapdragon 820 processor, Adreno 530 GPU, 4GB of RAM, IP68 waterproofing, Android 6.0.1 Marshmallow OS, 23MP primary camera and fingerprint sensor as well.

The leaked Xperia smartphone is rumored to be launched as either Xperia XR or XZ but so far, no official information is released yet. So we will have to wait till IFA 2016.

Sony’s IFA press conference starts at 1 P.M CET on September 1st, 2016 and that is when we will come to find out official details of all those products shown in the teaser above.