How to Run Multiple Apps in Freeform Floating Windows in Android 7.0 Nougat Without Root

Android 7.0 Nougat is officially here and one of the highlighted feature of it is the support for multi-window, including the split-screen mode and Freeform mode. Freeform mode is supposed to be enabled only by manufacturers of larger-screened devices.

But there are methods available to enable the Freeform floating windows in on other devices running on Android 7.0 Nougat using either ADB, or modifying the system partition using root. But these two methods can be a bit difficult for people who are not much tech-savy.

There is still a way that let you partially enable Freeform window mode on Android Nougat 7.0 without root or using the ADB. So if you wuld like to have the Freeform Floating Windows on your Android smartphone then, follow the steps explained below.

How to Run Multiple Apps in Freeform Floating Windows in Android 7.0 Nougat Without Root

HOW TO : Unlock the Developer Options on Android Smartphones

2. Open the Developer Options. Scroll down to the bottom and enable the option “Force Activities to be Resizable”

4. Open the Play Store and download the Taskbar application from the link given below.

5. Launch the Taskbar app, scroll down to the bottom, and make sure "Freeform Window Support" is enabled.

7. Clear all recent apps and go to your Home screen,

8. Now, tap on the new Taskbar drawer icon , and a list of all your apps will appear,

Important Note: Upon tapping the Taskbar icon, all of the icons on your home screen should disappear, leaving only the wallpaper visible in the background. If that's not the case, try taping the icon multiple times. It should eventually work.

Alternatively, if it's taking way too many taps to get there, we have discovered that this method may work better from the Recent Apps screen, rather than the Home screen. So, if you open Taskbar but your icons are still visible in the background, just go to the Recent Apps screen without closing Taskbar app and then give the drawer icon one or two more taps. It should launch properly. 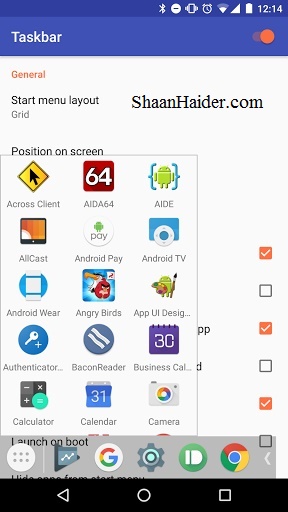 8. Once this condition has been met, you can then freely select apps from the list and they will launch in floating, resizable windows

Tip : If for some reason your apps don't start in floating windows, but in full screen mode instead, try launching Taskbar from the Recent Apps screen. In fact, if anything go wrong, we'd advise you to try launching from there, instead from the Home screen. Bugs are to be expected, since freeform window mode is not officially a port of Android Nougat yet.

That's it You can now listen music from the official YouTube app while reading the news, texting your friends and even taking selfies' Yes, the camera works in this mode too. So that's something .

Anyway, keep in mind that this feature is not officially available yet, and this is simply an easy trick to partially enable it on any device running Android 7.0 Nougat, so some bugs are to ae expected.

However, it's still a cool new thing to try out, and since it's so easy to do, you might want to check it out if you own a device running Nougat.