Covers and cases are very important accessories for smartphones these days. They are not only used for protection but also to improve the productivity. That is why, Samsung launched a set of official cases and covers with Samsung Galaxy S7 Edge when they launched the device.

Samsung Galaxy S7 Edge LED View Cover comes in a small and nice packaging. Inside the box, you will find a Quick Start Guide along with the well placed and protected case. The front of the box shows off the kind of notifications you can see on this LED View Cover without opening the front folio.

On the back of the device, highlighted features of the cover is printed along with the product information and regulatory information. You can watch our unboxing and detailed review video of Samsung Galaxy S7 Edge LED View Cover below.

Since this cover is designed by Samsung itself specially for Samsung Galaxy S7 Edge, it fits perfectly on the device. The front side of the device is plain and there is just one cut for the earpiece to talk with flap closed. The LEDs used for the display are hidden and because of that the flap of the cover looks regular.

On the back side, there is Samsung branding and one single cut for camera, heart rate sensor, LED flash etc. The top and bottom of cover are open to access the ports. On the left side, there are marking for volume rockers placed at the correct side to let you adjust the volume of your Samsung Galaxy S7 Edge without opening the cover.

Once the cover is opened, inside there is a hard and great quality plastic slot to put the device in it.Behind the flap, there is a card slot provided where you can put some non-magnetic cards. There is a slot/pocket provided on the back side of the flap to cover the Home button as it is slightly above the rest of the body of the phone. 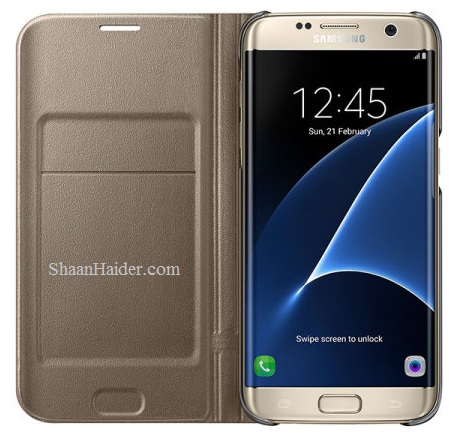 The slots of card and Home key are provided in a way that they do not occupy any space for themselves and fit so perfectly that when you close the folio there is no gap between the flap and the screen even after putting the card inside. So, this significantly reduces any bulge while being useful. And the card pocket let you store up to three cards.

The material used is paddy and provides good protection to the device without making it so bulky. It comes with leather finish that brings the premium and minimalist look.

One drawback here is that the top and bottom of the center of the cover is a bit prone to wrinkles as the plastic case inside doesn't provide support to those part of the cover. So after a while you might see the material getting softer on those parts.

As the names suggests, Samsung Galaxy S7 Edge LED View Cover comes with LEDs to display the important notification on the cover itself. The LEDs are hidden perfectly under the flap and they light up only when it is needed, basically when the is a live notification or when a reminder notification when you close the flap.

The LEDs show the notification in retro dot-matrix format and that looks really beautiful. There are four kinds of notification you can see on your Samsung Galaxy S7 Edge LED View Cover and all of them are for the default phone apps only and they are - calls, battery, alarm and messages. No third-party apps are supported here. Along with these notifications, it also display the current time whenever you close the cover. 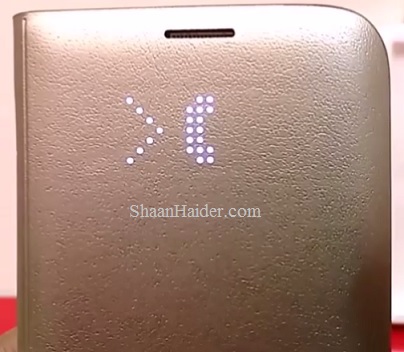 When you receive a call, the Samsung Galaxy S7 Edge LED View Cover will show the incoming call on the flap with the options to accept or reject the call by swiping on the cover itself. One big drawback here is that the cover only shows that you are having an incoming call, it does not show who is calling you as we have seen in HTC Dot View Covers. So you will have to open the flap to know who is calling and whether to answer or reject the call.

If there is any missed call or unread message then also, it shows the reminder notification about them.

When you set an alarm and it starts ringing, you will get the notification on the cover again and you can cancel or snooze it right from the flap of the cover without open it.

You can also check the battery status of your device on the cover and if there is a message waiting for you to read, the Samsung Galaxy S7 Edge LED View Cover will show that as well.

Since this cover is designed by Samsung, it gets detected by the Samsung Accessory app right after you put the phone in the case. If you go to the Accessories settings, you will find two options for the LED View Cover there. 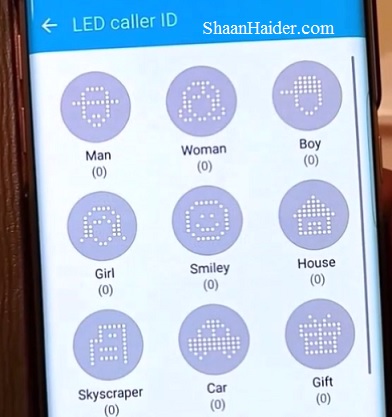 Another option under the Accessories settings available for Samsung Galaxy S7 Edge LED View Cover is the Automatic Unlock that let you unlock the screen automatically by just opening the cover. But if you are using a password, PIN or fingerprint ID then, this will just light up the screen and you will have to unlock it manually.

Samsung Galaxy S7 Edge LED View Cover is nice cover. It is designed specially for Galaxy S7 Edge by Samsung, so it fits perfectly. The design is nice and the material used are of high quality. LEDs are very bright and look beautiful in dark. The notification feature is useful and so is the LED Caller ID.

The negative side is that for incoming calls, you will need to open the cover every time if you are not using the LED Caller ID for a particular person. Also there are not much customization options like theme, third-party apps support etc available.

Considering the price of the Samsung Galaxy S7 Edge LED View Cover, it is a good deal as it is a high quality cover and comes with few extra features. But if you do not fancy having something like this and just want protection for your Samsung Galaxy S7 Edge then, there are cheaper alternatives available too.