In the world of technology and social media, 360-degree imaging is getting popularity now. Facebook is allowing people to post 360-degree videos and now 360-degrees panoramic live videos are available on Facebook. Twitter also showed off this feature few months back. And people are already posting 360-degree images on Instagram following an unofficial method.

Another popular thing these days is the Virtual Reality and the real fun of VR is in the 3D content. You can enjoy 360-degree images and videos in VR headsets but the 3D experience would be far greater in terms of fun. 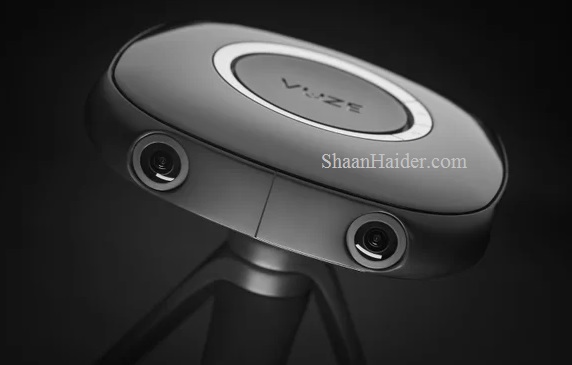 You will find lots of 360-degrees cameras in the market but all of them capture the images and videos in 2D only. So if you are looking for 3D 360-degree cameras available for consumers then you will have to try hard to find something.

Vuze comes with 8 Full HD cameras and 4 directional microphones to capture the images and videos in 3D, 2D and 360-degrees with the help of an easy to use system. User can record 4K resolution videos and enjoy them in virtual reality headset as spherical videos. It is claimed that Vuze captures up to two hours of videos on a single charge.

Below is a 2D 360-degree video recording and image samples of Vuze camera, the same video can be converted into 3D from the player settings if you want to watch it in 3D. You can watch many more including 3D VR videos created by Vuze camera in the Showroom section of official Vuze website.

Vuze camera is compact and the dimension of the device is just 12 x 12 x 3 cm. So you can easily carry it anywhere you like and use it instantly to capture a moment in 3D and 360-degree.

There are dedicated iOS and Android apps provided to control the camera by using your smartphone. For social media lovers, the feature to uploaded the captured content directly to supported platforms like YouTube and Facebook is also available for instant sharing.

The complete list of all hardware specs and features of Vuze 3D 360° VR camera are given below.

Vuze camera is the winner of this year's Innovative Awards at Consumer Electronics Show 2017 event and you can buy it from the official Vuze Camera website by visiting the link given below.