We have posted about Motorola's upcoming Hello Moto World event in which it is expected that Motorola will launch the Moto Z2, Z2 Force and other smartphones.

In the month of May, Moto Z2 Force with dual rear cameras surfaced for the first time in press shots. After that more information regarding the device was provided by the brand in Motorola roadmap for 2017 that Z2 Force will come with 1Gbps LTE support and ShatterShield, Motorola's shatterproof screen. 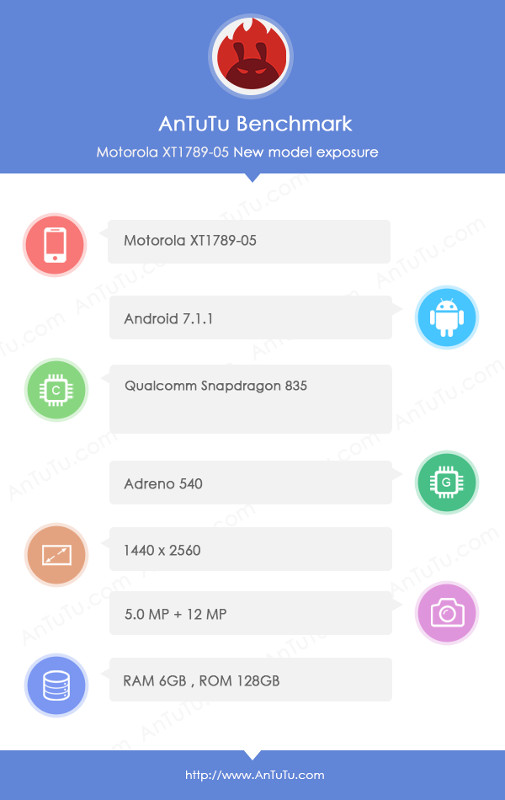 According to leaked hardware specs of Moto Z2 Force on AnTuTU benchmark, the device will sport a Qualcomm Snapdragon 835 octa-core processor along with Adreno 540 GPU. The device will run on the Android 7.1.1 Nougat OS. For imaging, there will be 12MP rear camera and 5MP front-facing camera. But the leaked images showed dual-rear camera setup.

Moto Z2 Force will come with 6GB RAM and 128GB internal storage. Though the screen size is not mentioned, it will have a WQHD display with 1440 x 2560 pixels resolution.

Previously leaked images of Moto Z2 Force already showed that it will feature a metal unibody design, dual rear cameras with dual-tone LED flash for both front and rear cameras. There will be connector pins on the back of the device to connect Moto Mods to the phone, just like the last year’s Moto Z phones.

But these are just rumored and leaked specs of Moto Z2 Force, we will find out the official hardware specs and features of the device soon once it officially launched.