Motorola is launching lots of smartphones one after another. Motorola has just scheduled its upcoming #HelloMotoWorld event that is scheduled in New York City on July 25th.

It is expected that Motorla is going to introduce the new high-end flagship devices under the ‘X Series’ and ‘Z Series’ smartphones. The devices expected to be launched at Motorola event are Moto X4, Moto Z2 and Z2 Force. 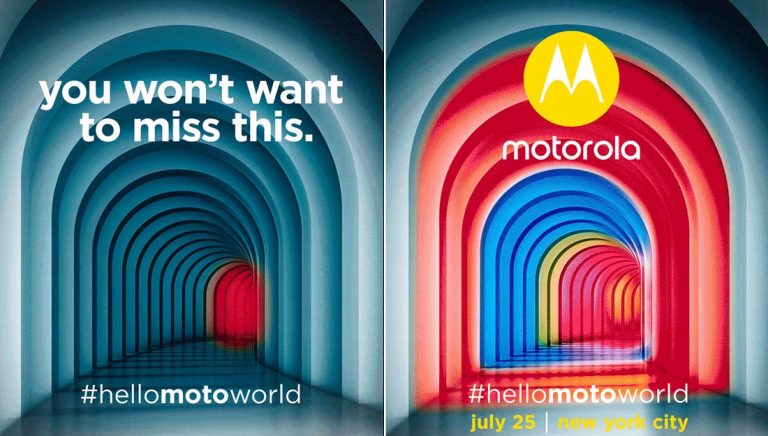 The only thing that event invite says is, "You won’t want to miss this". There is no other information provided. But looking at the color changing from one pic to another it seems Motorola will be launching the either colorful smartphones or color changing LED back panels like Alcatel.

Following the Motorola road map for smartphones and the recent releases, the Moto Z2 Play, Moto E4 series and Moto C series are already official now. So the remaining ones are Moto Z2 and Moto Z2 Force that are expected to be announced at the event, along with new Moto Mods.
It is also rumored that the new Moto Mods will bring the AR (Augmented Reality) capability to the Motorola smartphones.

Along with the high-end Moto Z2 and Moto Z2 Force, two mid-range smartphones – Moto G5S and Moto G5S+ are also expected to be announced at the same event.

Motorola roadmap for 2017 has already revealed the information about the 1Gbps LTE support and ShatterShield, a shatterproof display for the flagship Moto Z2 Force smartphone.

But so far these are just rumors and we will find the exact details of the devices to be announced very soon officially by Motorola.