After a long series of rumors and various hardware and specs leak of Samsung Galaxy Note 8, Now Samsung has finally started sending out the media invites for the next Galaxy Unpacked event that is scheduled to be held on August 23rd in which Samsung is going to unveil the upcoming flagship Galaxy Note 8 smartphone.

The media invites asks people to "Do Bigger Things" with their phone, hinting that the Note 8 will have great multitasking capability and big screen. The bezel are also hinted to be small like the Galaxy S8 and S8+ smartphones. 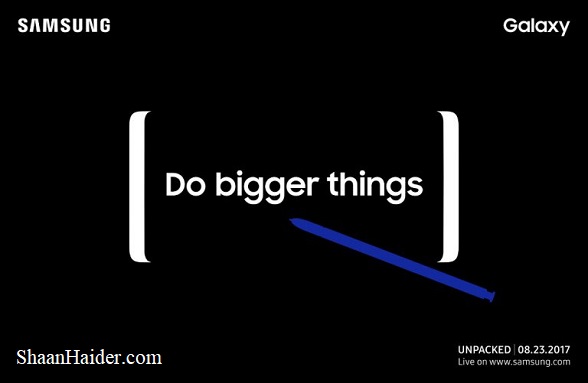 The invite also asks to do bigger things instead of just thinking about them showing the creative feature that the S Pen stylus will bring to the Samsung Galaxy Note 8 smartphone.

According to the previously leaked information and rumors, Samsung Galaxy Note 8 is supposed to come with a 6.4-inch OLED display with the same QHD+ resolution with 1440 x 2960 pixel and 18.5:9 aspect ratio like Galaxy S8 series of smartphones.

It is rumored to feature the dual-rear camera setup with 12 MP wide-angle lens supporting dual photodiodes and a 13 MP telephoto lens. Both lenses are supposed to have the OIS.

Samsung Galaxy Note 8 is expected to come with the Qualcomm Snapdragon 835 or Exynos 8895 chipset as they are the best processors available and used earlier in Galaxy S8 depending on the region. Device will sport 6GB of RAM, improved and new S Pen features along with the Samsung's Bixby AI voice assistant.

The Samsung Galaxy Unpacked event for Samsung Galaxy Note 8 launch is scheduled for August 23, 2017 and it will take place at Park Avenue Armory in New York City and will start at 11 AM EST