HTC U11 Plus with 6" Quad HD+ Screen, 6GB RAM Expected to be Announced on November 2nd

Since last few weeks lots of information regarding the HTC U11 Plus were coming out from its hardware specs to the launch event date. And now we are confirmed that the device is going to be launched soon.

HTC has started sending the media invites for an event in Taipei scheduled to be held on 2nd November. The invite mentions the date and time of the event along with a big “U” logo showing the device going to be announced is a HTC U series smartphone and most probably, HTC U11 Plus. 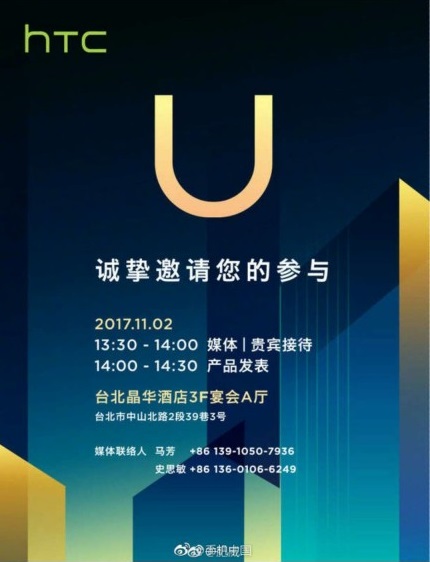 As the name suggests, HTC U11 Plus is going to be the advanced version of the previously launched HTC U11 smartphone. Based on the leaked images of the device, the design of HTC U11 Plus will be pretty much similar to HTC U11 and it will be available in Amazing Silver and Brilliant Black color options.

It is also rumored that HTC U11 Plus will come with a 5.99-inch Quad HD+ display with 18:9 aspect ratio and 1440 x 2880 pixels resolution. The device is expected to be powered by the Qualcomm Snapdragon 835 chipset. The 4GB RAM variant will come with 64GB internal storage and or 6GB RAM variant with 128GB of built-in UFS 2.1 storage.


On the imaging side, HTC U11 Plus is rumored to come with a 12MP optically stabilized primary camera with f/1.7 aperture and UltraSpeed autofocus. And on the front side, there will be an 8MP camera for selfie purpose.

It is also expected that it will feature IP68 waterproofing and dust resistance certification and Quick Charge 3.0 fast battery charging technology.

Edge Sense, one of the most highlighted feature of HTC U11, will be present in U11 Plus as well along with the USB Type-C USonic headphones.

But so far all these are just rumored specs and we will soon find out about HTC U11 Plus officially once it is announced.