HTC U11 was launched just few days back but it is creating huge waves in the smartphone market, thanks to top notch hardware specs, unique and innovative features and overall performance.

HTC U11 is a late flagship entry in this year but still it is one of the best smartphone in the market. If you are planning to buy a new flagship smartphone and then here are the top five reasons why HTC U11 is a revolutionary phone and why you should buy it. 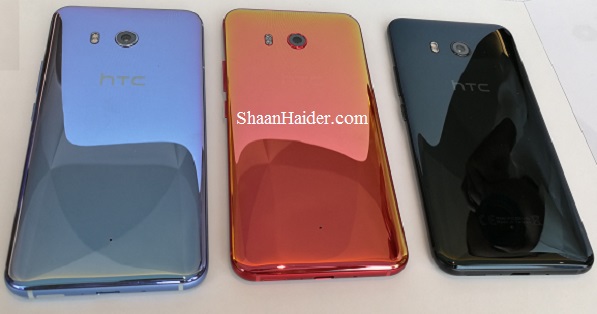 HTC U11 comes with the highest ever DxOMark score and it officially makes HTC U11 the best smartphone camera currently available.

There are lots of new features are included in the camera of HTC U11. When the camera is zoomed in, Acoustic Focus detects the audio source and increases its sounds and creates an audio zoom functionality. There is 3D audio recording feature provided in video recording and it is also available for the front camera. And like earlier HTC smartphones, High-Res Audio recording is also provided while recording the videos.

So if camera is one of the most important factor of your smartphone purchase, you must go with the HTC U11.

HTC U11 comes with a pressure-sensitive bezel on both side. Edge Sense works on the amount of pressure applied on the bezel and then performs a pre-defined task based on the kind of pressure applied. There two modes of Edge Sense - Squeeze and Squeeze & Hold. Each of these can be assigned a particular task to perform and it really improves productivity.

HTC is also planning to integrate the Edge Sense in third-party apps and then the usability and functionality of Edge Sense will improve a lot and will also provide an improved user experience.

Below is a video showing the features of Edge Sense in HTC U11.

Google Assistant is available on every compatible new Android smartphone. Amazon Alexa is also available on Huawei Mate 9 in few regions but what makes HTC U11 better than others is its own HTC Sense Companion AI. Combining all these, HTC U11 comes with three personal assistants and it is the only smartphone with this feature.

We have already seen the Sonar based HTC USonic technology in previous HTC smartphones like HTC Bolt, U Ultra and U Play. But in HTC U11, USonic is even improved a lot as it comes with Active Noise Cancellation. It works perfectly and even improves the quality of the audio you are listening, for example by reducing the noise of crowd in a live concert recording.

It also comes with the latest generation of HTC BoomSound™ Hi-Fi Edition to provide nice quality audio from speakers and earphones as well If you are a music lover and audiophile, HTC U11 is the best smartphone for you as the USonic experience is totally unique to this smartphone only.

People can say that the performance of HTC U11 is not unique or the best as the Galaxy S8 comes with the same Qualcomm Snapdragon 835 processor, Adreno 540 GPU and 4GB of RAM. But it is the software optimization that makes the difference here.

In our benchmarking tests, HTC U11 performed better than the Samsung Galaxy S8 most of the time and credit goes to enhancement and optimization of the HTC Sense. So, it makes the best performing smartphone right now.

Also, the 6GB RAM variant of HTC U11 will obviously perform even better specially when it comes to multitasking and gaming because of 50% more amount of RAM.

HTC U11 comes with the Liquid Surface design that we have already seen earlier in HTC U Ultra and U Play smartphones. But it is even improved in HTC U11.

Liquid Surface back panel of HTC U series of smartphones mimics the reflective property of water surface and changes the color and shade accordingly. It looks really beautiful and make HTC U smartphones different than any other smartphone available. For HTC U11, there are two new colors added and on some low angles the color of Solar Red changes to golden totally from red.

Liquid Surface technology is totally unique to HTC only and it really gives HTC U11 more marks in terms of design w.r.t other smartphones.