Acer, the official global PC partner for the Intel Extreme Masters, has launched the Official Predator IEM PC range during the series.

Considered one of the toughest esports competitions globally, the Intel Extreme Masters Championship in Katowice saw 16 elite teams from all over the globe compete for US$500,000 as well as the Predator Intel Extreme Masters trophy which landed in Poland following a six-month tour of Europe. For Acer, IEM is a unique opportunity to connect with loyal eSports fans in an authentic way that adds value to their experience

Acer showcased new additions to its Predator gaming monitors range at the Intel Extreme Masters 2020. Gamers who attended the event were the first to see the brand-new Predator monitors in action. These monitors were first launched at CES 2020 in January and offer expansive views with cutting-edge technology that support true-to-life gameplay. 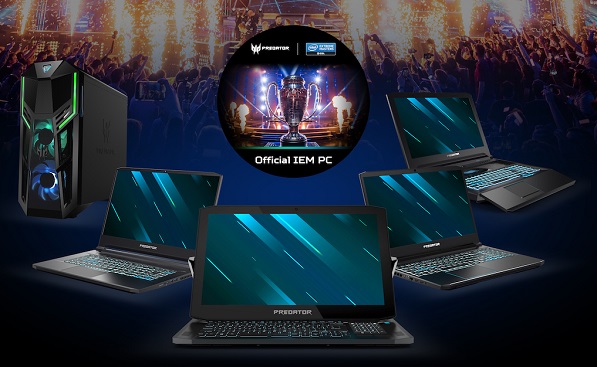 The Predator CG552K gaming monitor, featuring a huge 55-inch 4K OLED panel that is NVIDIA G-SYNC compatible, is ideal for hardcore PC and console gamers that want a higher vantage point. The panel supports up to 400 nits brightness and, with Delta E.

The new Predator Orion 5000 comes with the overclockable octa-core 9th Gen Intel® Core™ i9-9900K (with Z390 chipset) and is equipped with the revolutionary NVIDIA Turing™ architecture on the NVIDIA GeForce RTX 2080 GPU, which combines real-time ray tracing, artificial intelligence, and programmable shading to immerse players in a visually-stunning gaming experience.

A new option for the latest GeForce GTX 1660 Ti has been added to the Predator Helios 300, where the top configuration is a GeForce RTX™ 2070 GPU with Max-Q Design combined with the newest 9th Gen Intel® Core™ i7-9750H processors up to 32GB of DDR4 2666MHz memory and up to two PCIe NVMe SSDs in RAID 0 plus a hard drive.

The Predator Helios 700 includes a unique HyperDrift keyboard that slides forward, allowing for increased airflow directly through the top of the notebook and enabling gamers to push the device’s powerful components to their full potential.

Acer showed a preview of an industry leading 300 Hz IPS Panel with 1 ms response time on its Predator Triton 500. This powerful gaming notebook has been slimmed down to just 17.9 mm thin and weigh 2.1 kg. The slim Triton 500 can easily be slipped into a backpack or briefcase, but once taken out and powered on, it takes advantage of up to a 9th Gen Intel Core i7 processor to become a gaming powerhouse.

The Predator Triton 900 is a gaming notebook with an inventive form factor that bears innovative new design features, namely a CNC-machined Ezel Aero Hinge™ that flips, extends, or reclines the device’s 17-inch display.

The Predator X32 gaming monitor will be available in EMEA in Q2 starting at USD 3,575.

The Predator Triton 900 is available in EMEA with prices starting at USD 4,550.

The Predator Triton 500 is available in ME with prices starting at USD 3,540

The Predator Helios 700 is available in ME with prices starting at USD 4,355

The Predator Helios 300 is available in ME with prices starting at USD 1,905

The Predator Orion 5000 is available in ME with prices starting at USD 2,177