Deezer is inviting all music fans to use a specially designed online feature to nominate songs that best express the love that people have for the Kingdom. Music fans all over the nation can nominate their songs from 20th September, 2020. The final compilation of songs will be unveiled on Saudi National Day under the banner of ‘Saudi Flow: Le Noghani Lel watan’. It will be a unique musical experience, created by music fans and curated by Deezer to celebrate the Kingdom of Saudi Arabia. It will be the nation's exclusive musical expression of love, pride and beauty, showcasing the country’s musical DNA.

The goal of the campaign is to bring the nation closer together through music, in keeping with Saudi Arabia’s Crown Prince HRH Mohammed bin Salman’s slogan “Himma Hatta al-Qimma”. The slogan recognises The Crown Prince’s sentiment which compares Saudi strength to the Tuwaiq Mountain near Riyadh. 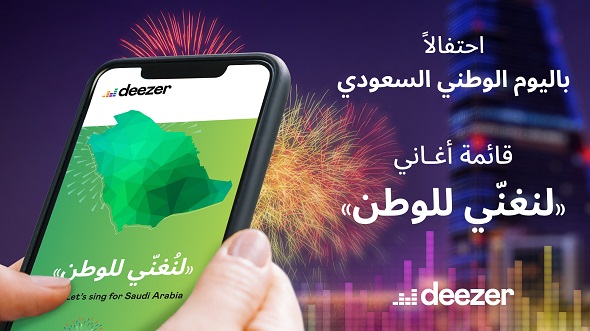 Saudi Flow is inspired by Deezer’s signature feature - ‘Flow’. Based on a proprietary algorithm and recommendations from Deezer’s professional music editors, Flow offers an endless mix of old favorites and new recommendations in one ever-evolving stream. Flow is entirely live and adapts in real-time to users’ music preferences. While Deezer’s algorithm is responsible for presenting every listener’s personal preferences, the Flow of a whole country should reflect the preferences of its people, but it is still supported by Deezer’s editors and technology.

Join the celebrations today and nominate your song by visiting http://nationaldayplaylist.com. Saudi Flow: Le Noghani Lel Watan will be available on Deezer on September 23rd, 2020.

We want every music fan to be able to celebrate their love for this beautiful and spirited country. We have imagined ‘Let’s sing for the homeland’ as a place where people can come together as one, united by music. Just like Flow for a music fan, Saudi Flow: Le Noghani Lel Watan will be a reflection of the Nation’s musical DNA. I would like to invite everyone to join the online celebrations and create the nation’s first Flow!