Huawei Tech Investment Saudi Arabia Company announced that the all new addition to its PC lineup, the HUAWEI MateBook X, will be available soon for pre-order in Saudi Arabia.

Boasting an ultra-light and thin body that is smaller than an A4 paper, weighing just 1kg, the HUAWEI MateBook X is easy to carry around for today’s highly mobile consumer. In addition to being really slim, the overall color and finish of the HUAWEI MateBook X further contributes to its looks. The aluminum clad laptop’s minimalistic finish is topped off with a CNC die casting process and a sophisticated paint spraying process for at least five times, which further adds to the laptop’s elegant finish.

However, once the laptop is opened, users are treated to yet another visual treat with its massive touch screen 3K Infinite FullView Display. The first of its kind in the industry, this display offers a unique borderless experience with a screen-to-body ratio of 90%  in a 3:2 aspect ratio. This viewing aspect ratio allows for a larger viewing area for a more immersive experience. In addition to this, the overall viewing quality is improved thanks to 100% sRGB colors and a 1500:1 contrast ratio. Simply put, this means that no matter what the content being displayed, details and colors will be immaculately reproduced for a cinematic experience like never before. 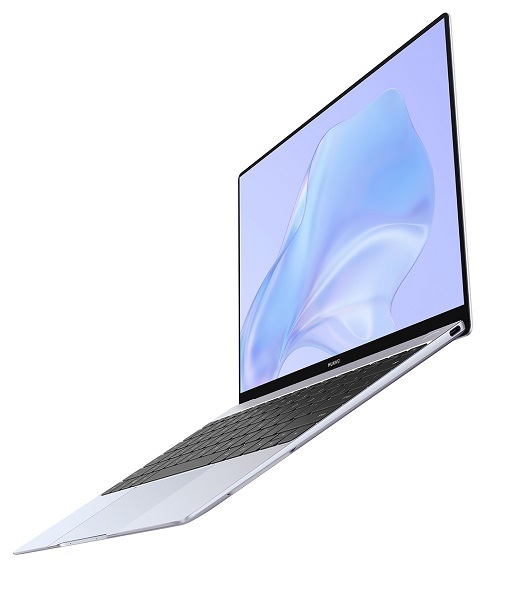 Huawei’s Multi-Screen Collaboration feature as a part of Huawei Share is available on the MateBook X too. Simply enable NFC and Wi-Fi on both devices and tap the compatible HUAWEI smartphone on the laptop’s clickpad (which now houses the Huawei Share tag) to seamlessly stream the smartphone’s display on the laptop screen.

Once this is done, users can enjoy a wide range of interactive features offered by the upgraded Multi-Screen Collaboration. This includes a picture in picture view along with providing users access to control two devices with their own app platforms at the same time. Users can open apps on their smartphone on the laptop display, drag and drop files, images, documents and text and even seamlessly edit files saved on the phone directly from the laptop. This feature also allows users to attend calls on their laptop, set up an instant hotspot and even control their smartphone with PC peripherals such as keyboards or mice for greater productivity.

The HUAWEI MateBook X comes with a wide range of features that are designed to enhance productivity on the go. One example of this is the HUAWEI FreeTouch click-pad. In addition to delivering incredible response with haptic feedback for a better tactile experience, the sheer size of this clickpad gives users more space to work and also improving accuracy.

HUAWEI MateBook X comes with 10th generation Intel® Core™ i5 processor and up to 16GB of RAM ensuring that it is all set to tackle all kinds of heavy load tasks ranging from casual web browsing or entertainment to performance intensive work or studies. This is further supported by the HUAWEI MateBook X’s capability for Wi-Fi 6 support, to ensure proper Internet connectivity and speeds up to three times that of WiFi 5.

Complementing its massive display is the HUAWEI MateBook X’s audio solution which comprises of a powerful quad-speaker system with split-frequency setup delivering rich 3D audio directly from under the keyboard. Thanks to advanced audio algorithms, this setup virtualizes surround sound allowing for an amazing cinematic audio experience while watching movies or even while enjoying some music.

Huawei MateBook X has a recessed camera setup, which has the webcam embedded into a keycap, only popping up when required. Additionally, this also contributes to the laptop’s Infinite FullView Display.The power button on the HUAWEI MateBook X also doubles a Fingerprint reader. Thanks to this, users can log in to their laptop while turning it on itself, saving time and making it much easier to get started with work.

Joining the HUAWEI MateBook X, is the HUAWEI MateBook X Pro, which boasts an Ultra FullView Display in a sleek and elegant Emerald Green color. This version also packs in features like Multi-screen collaboration as a part of Huawei Share complete with 10th generation CPUs for professional performance and an all-day long battery life.

HUAWEI MateBook X will be available in the Silver Frost color for pre-order starting from September 27th in Saudi Arabia.