Lenovo has announced the upcoming launch of the Legion Gaming Festival – a virtual event taking place between 22 and 26 December 2020, specifically for players in the Kingdom.
Over the course of the five-day period, Saudi Arabia’s casual and professional gamers will be united under a single platform and provided with the opportunity to interact, compete and spectate alongside fellow enthusiasts online.
Days 1 and 2: Opening and Fornite Tournaments
As part of the opening proceedings, Lenovo will reveal the R&D behind its advanced gaming PCs under the Legion line-up. Spearheaded by the Legion 7 and Legion 5, the upgraded Legion series has been developed following extensive focus groups and surveys with gaming councils and professionals to ensure a continued commitment to innovation. 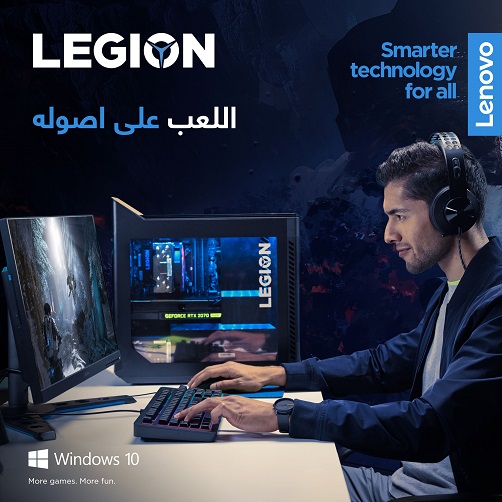 Gamers attending the festival will also spectate popular Fortnite gamers in the region competing in Fortnite Zone Wars – a creative game mode which enables the community to create different styles of arenas and challenges for two teams of high-profile players to take part in. Keen gamers can even take part in the Fortnite Prop Hunt – where teams between 2-9 players in size must disguise themselves as props and try to trick their opponents into losing them.
Day 3: Funko Games Battles
The third day of the tournament is designed to appeal to casual gamers who simply wish to play for fun, with classics such as Fall Guys, Rocket League and Brawlhalla to offer. Winners of the tournaments will be interviewed live, while various pro teams and players will also make guest appearances throughout the course of the day.
Larger groups of 5 to 10 players can also connect to play Among Us – where each gamer is assigned to either be a crewmate who helps complete tasks to win, or the imposter who sabotages their chances.
Day 4: MOBA Style Gaming
With the growing prevalence of multiplayer online battle arena (MOBA) gaming, the fourth day of the Legion Gaming Festival focuses on honing gamer combat skills. In the Dota 2 All Stars Tournament, best players in the region will compete, alongside their respective teams – chosen by the viewers.
For those interested in testing their skills against the professionals, teams of 5 gamers in the community will battle against 5 influencers in Dota 2 Pudge Wars, facing-off on a square map divided by the challenge of an uncrossable river.
Gamers will also be invited to show off their Legion gaming setups – with the best setup being featured during the livestream.

Day 5: First Person Shooter Challenges and Closing
The final day of the festival will focus on First Person Shooter games, such as Apex Legends, Rainbow Six Siege and Overwatch. As well as watching the final tournament rounds, gamers will also hear from the winners during special interview sessions and can also enjoy a virtual DJ set from the comfort of their homes.
Commenting on the launch of festival, Marwan Bsat General Manager, Lenovo Saudi Arabia said:

We’re excited to be bringing the Legion Gaming Festival to the Kingdom – a nation which continues to lead the entire region’s gaming sector and possessing some of the world’s best talent. Beyond what we are able to offer via our products and services, it’s also important for us to create memorable experiences and to work with our network of partners to give back to the communities in which we operate. The demand for gaming events of this nature are clear, and as gamers will see, we’re making the Legion Gaming Festival as inclusive as possible. Whether you game as a full-time profession, or simply as a hobby – all are welcome and we truly have something for everyone.