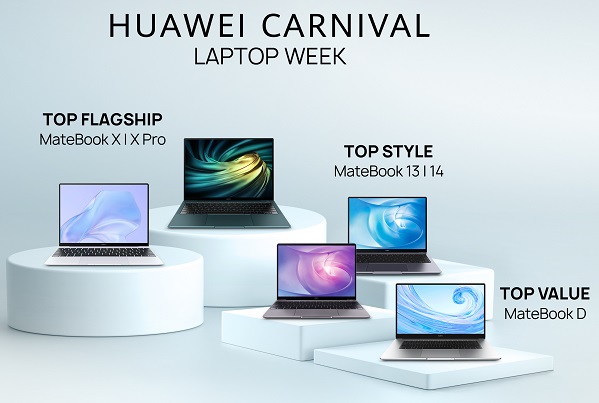 The top flagship segment consists of the HUAWEI MateBook X Pro and the HUAWEI MateBook X. These top-of the line laptops combine extreme portability, immersive viewing and cutting edge performance that aim to give consumers an overall premium experience.
These laptops epitomize the signature design and elegant craftsmanship that Huawei is reputed for with both laptops being extremely light-weight and ultra-thin, making it the perfect choice for professionals who demand power-on-the go. Both run on top-notch hardware with 10th generation Intel® Core™ i7 and i5 processors along with NVIDIA® GeForce® MX250 for optimum graphics. Putting it all together, these flagship laptops deliver a smooth experience in every scenario from graphic and video editing, to gaming and multimedia content consumption.
Enjoy the promotion on the HUAWEI MateBook X at a starting price of 5,499 SAR and HUAWEI MateBook X Pro for 6,499 SAR - the offer will start on the 20th of December and ends on the 31st of December. Devices are available for purchase from Huawei Flagship Store in Riyadh Park and Huawei E-shop.
For the trendier user, Huawei’s top style laptops, the HUAWEI MateBook 13 and HUAWEI MateBook 14 are the best choices to go for. Boasting stylish design, powerful performance and enhanced connectivity, these laptops attract young professionals who want more from a laptop that looks just as great. It comes with an immersive viewing with the HUAWEI FullView display which supports resolutions up to 2K and is complemented by 10th Generation Intel Core processor and 16 GB RAM for all-round performance.
The laptops also pack in long-lasting battery life and large storage options to cater to user needs. Both laptops also filer out excessive blue light to reduce eye fatigue and provide a safer viewing experience. These lightweight laptops, with its slim profiles and quiet fan designs, are designed to stand out from the crowd, easily giving them the title of being the top style laptops in Huawei’s lineup.
HUAWEI MateBook 13 is now available at a price of 4,499 SAR instead of 4,999 SAR. This promotion will be available between December 20th and December 31st. You can purchase the device from Huawei Flagship Store in Riyadh Park and Huawei E-shop.
The final category is the laptops with top value, which include the HUAWEI MateBook D 14 with a 14-inch display. These value driven laptops is aimed primarily at students but also packs enough power to go through the day. Users have the option of choosing between an Intel or an AMD configuration, depending on their needs. The Intel variant comes with a 10th generation Intel CPU supported by NVIDIA GF MX250 for stunning graphics. On the other hand, the AMD variant, uses an AMD Ryzen 3000 series processor with a Radeon Vega graphics card for striking visuals. This configuration option is powerful enough for all daily tasks, along with gaming and even entertainment needs. Keeping in mind all-day performance, the HUAWEI MateBook D series use a 65W Type-C charger that can also be used to charge up user’s smartphones. For long-term use, Huawei has fitted in a 56Wh battery on the MateBook D 14. All of this at a friendlier price point, making innovative technologies accessible to more users.
HUAWEI MateBook 14 is now available with a promotional price starting from 2,799 SAR. The offer is available between December 20th and December 31st. The device is available for purchase at Huawei Flagship Store in Riyadh Park and Huawei E-shop.