Saudi Arabia’s leading esports platform Kafu Games signed a sponsorship contract with gaming smartphone manufacturer UCC - telo GameZ for 7 weeks of unlimited video game tournaments on their platform.
Keeping up with the latest esports trends in the Kingdom, telo GameZ recently launched Lenovo Legion, a high-end gaming mobile that puts state-of-the-art gaming tech in the pockets of gamers. Kafu Games is hosting 7 weeks of non-stop tournaments sponsored by telo GameZ with prize pools worth hundreds of dollars. Started on 18th November, the tournaments will go on till 7th January for popular games like FIFA 20, PUBG, Fortnite, Rocket League, Call of Duty, Valorant, and more.
Gaming segments worldwide saw an increase in player engagement and revenues due to the COVID-19 lockdown issued in multiple countries. Mobile gaming is winning the race with 13% year-on-year growth. MENA is home to the world’s most active gaming community and Saudi Arabia plays a huge role in its growth. With high-end gaming smartphones like telo GameZ Lenovo Legion, fans can join tournaments on Kafu Games, play and win on the go. 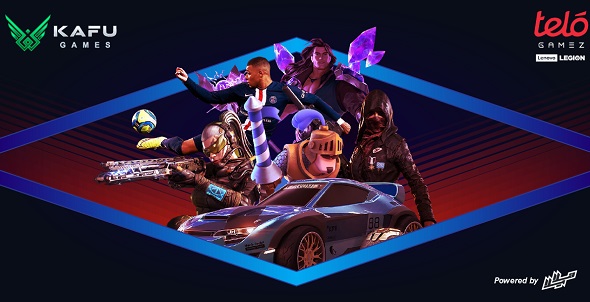 Kafu Games is an elite Saudi gaming hub that hosts esports tournaments for the biggest game titles. It has quickly become the most popular platform for immersive online gaming for esports fans in the Kingdom.
Kafu Games is also bringing its exciting range of competitions to the rest of the world, with special tournaments in the US, UK and Canada. The popularity of gaming in Saudi Arabia is increasing, and by going global, Kafu Games is expanding the Kingdom’s presence in the industry worldwide. The platform has seen growing interest from countries outside the region, with thousands of players from the US and other countries registering for tournaments.
Kafu Games hosted this year’s Gamers Without Borders in partnership with the Saudi Federation of Electronic and Intellectual Sports (SAFEIS). One of the largest global esports competitions, Gamers Without Borders raised $10 million for charities at the forefront of battling Covid-19. Kafu Games had over 15 Million website visits during this season, with players competing in multiple tournaments of PUBG, FIFA, Fortnite, Overwatch and more. With a widening global reach, Kafu Games aims to build an arena for esports that is as large as regular sports. This in turn will help to develop and strengthen an already active and enthusiastic community.
Anas Hemaid, Chief Executive Officer, Unique Component Company (UCC), said;

We’re proud to be the official sponsor of Kafu Games in bringing these exciting tournaments onto the platform. telo GameZ Lenovo Legion is a state of the art mobile phone. Developed with the most innovative technology, telo GameZ is designed to provide the best user experience, with unique features like customized horizontal UI & Livestream ready pop-up camera. Our focus is on providing high value to the users through accelerating bonds amongst the gaming community. Kafu games with their large user base became the obvious choice for us to reach out to our target audience, the discerning gamers. The team at Kafu Games has in-depth knowledge & insights into the gaming community, they have diligently worked along with us to design the tournament schedule and sponsorship campaign. Our aim is to equip gamers across Saudi Arabia with the latest gaming technology, creating a culture of challenges and fun. We’ll continue to evolve going forward as we bring more exciting features to Telo GameZ for Kafu Games’ users.