If content is king, video content is the emperor. As a platform, video has the unique ability to combine elements of all content types, be it text, sound, images, or movement. Even as the demand of the communications world evolve, video blogging or vlogging as it is commonly known, has emerged as one of the world’s most consumed content forms.

While Facebook has over 8 billion video views per day , social videos generate 1,200% more shares than text and image content combined . In fact, mobile video consumption rises by 100% every year and viewers retain 95% of a message when they watch it in a video, compared to 10% when reading it in text . According to a recent report, online videos will make up more than 82% of all consumer internet traffic this year, which is 15 times higher than it was in 2017 . On social media platforms such as Vimeo and YouTube, people view over one billion hours of video every day . As social media becomes increasingly become vlogger-centric, audiences are seeking bite-sized video content.

Vlogging has grown rapidly in the Middle East and Africa, with leading content creators (or influencers) leverage the power of social media and stunning visuals to grow their audiences and drive engagement. As such, vlogging techniques have massively transformed over the years. Beautiful bokeh effects, smooth focus transitions and more are increasingly being used by vloggers to create engaging content and grow their audiences. 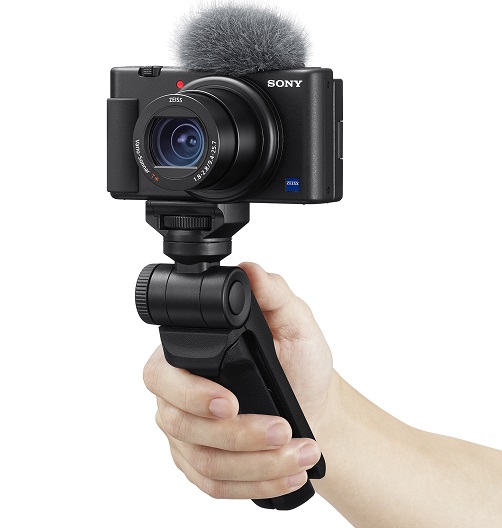 While smartphones with high-quality cameras are usually used for vlogging, the equipment used can be a real differentiator in the highly competitive world of content creation. With the art of content creation constantly evolving, the demand for better equipment has surged. Brands such as Sony are continuously investing in creating products that meet this demand. Sony is empowering vloggers with state of the art equipment to inspire creativity. From advanced imaging technology and features in its point & shoot cameras to full-frame mirrorless cameras that are not available on smartphones, Sony is helping vloggers tell more captivating stories.

To discover, nurture, and elevate regional talent in vlogging, Sony has spearheaded a highly successful mentorship programme for content creators, visualisers and aspiring storytellers in the Middle East. Aspiring vloggers and content creators undergo a three-month mentorship with powerhouse industry players as mentors, who are known social media influencers in the region.

Using Sony Vlog Camera ZV-1 and GP-VPT2BT Grip, participants shoot creative videos with their final projects featured on Sony’s social media channels and Alpha Universe MEA. As part of the mentorship programme, they also get access to exclusive online workshops to improve their photography, videography and editing skills. Winners get to do a commissioned project with Sony and win recognition as pioneer members of Sony Collective.

Vlogging skills are a powerful way to create content that is effective and engaging. These initiatives from Sony reflect its commitment to support the growing community, not only with the required camera technology but also with a platform to showcase their works to the world.