HTC is all set to release its 3D Evolution phone in Europe. The device which is a 3D camera and screen powered phone has gotten a lot of acclaim since news of its release hit us via tech website Engadget in the recent weeks. So why should we get excited about the HTC EVO 3D? Check out the 5 best thing about the EVO 3D

The HTC EVO 3D is one of those new tangled 3D camera phones – so is it any good? Well it is, possibly one of the best out there. The device has a 5mp 3D camera with two lenses to create the effect. The camera shoots 3D in 720p for those who wish to record moving images. It also shoots 5mp 2D imagery and 3mp 3D imagery in still form. This is as you can imagine quite cool and gives it a novel edge over the usual run of the mill 2D cameras, no matter how many mega pixels.

To take advantage of the excellent EVO 3D’s camera capabilities you need a good screen and the HTC has that. It has a 4.3in qHD screen that offers you just what you need for watching the images. The screen is extremely responsive, probably as much so as any screen made by HTC to date. It is also an excellent proposition for browsing with lovely accurate pinch to zoom and is a good device for streaming on. 3D wise it is very capable and its 3D animations look well as do streamed footage in both dimensions offered. 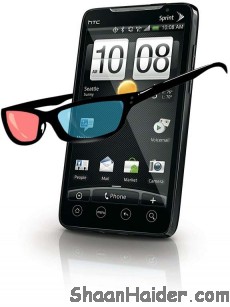 The EVO is also a well connected device and includes all that you need for connecting through a number of mediums including HDMI for connecting to a television. It also has a micro SD slot for memory expansion, a 3.5 mm jack ad a mini USB port for charging and connectivity as well as Bluetooth and everything else you would expect from a top end phone. The EVO also comes with top of the line Wi-Fi and 3G (and 4G in the US) connections of course.

The HTC’s mix of Android 2.3 and its famed Sense 3.0 interface make for an excellent mix and ensures the HTC is as good as anything out there at the moment. The device is intuitive and the 3D animations look well on the HTC’s screen. As you know Android is a great operating system and Sense really adds to its abilities.

HTC’s promise that there will soon be 3D streaming for movies to its device is also a cool though. Imagine watching the likes of Avatar in all their glory on your EVO –that is a cool enough reason to buy the phone alone.


3D phones are only just starting to emerge in phone markets throughout the world, although in the UK and Europe this is currently restricted to the EVO and LG's Optimus 3D. While similar in many features the EVO has the upper hand over the LG device in many areas, including a higher quality screen.