Whether you’re a Trekkie, a hardcore gamer, a self confessed book worm or a science junkie, London caters for all! With it being such a huge popular city, there is a lot more to it than just the larger attractions like Big Ben and the London Eye. Behind the scenes of London’s outward front are hundreds of places to satisfy your most nerdy desires! Here’s a list of some of the best geeky places to visit in London if you’re not so interested in a guided tour of Buckingham Palace;

Located in the basement of HMV in Trocadero centre, Gamerbase is home to over 150 games, state of the art Dell PCs and plenty of consoles to play on. With gaming tournaments for fans of all the popular franchises such as Call of Duty, Tekken and Streetfighter, combined with the ability to play games on your own, online and with players in Gamerbase, it’s seriously a gamers paradise. 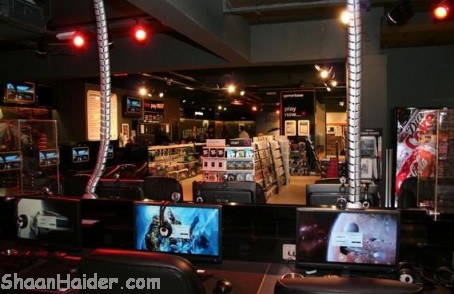 It’s open until midnight from Monday through to Saturday so if you’re planning on spending a good few hours in there, then I definitely advise you bring your own food or take some extra money with you.

It was obvious that Forbidden Planet, the U.K’s biggest comic and memorabilia shop would make it onto this fabulous list. It’s got everything, from ultra rare comic books to collectors dolls and manga. It even stocks a large selection of anime, superhero and video game t-shirts – if you’re lucky you may even pick yourself up a nice Dragonball Z t-shirt whilst you’re there! Think of it as a HMV for nerds.

If the thought of a day spent lurking around screaming children and over-enthusiastic tourists in the Natural History Museum really turns your stomach then your best bet is to head over to the Grant Museum of Zoology which is joined onto the University College London. It is a fantastic little museum which doesn’t see too many visitors despite it housing over 62,000 preserved animal remains, most of which are extinct! Expect to see the likes of the famous Dodo bird and Tasmanian tiger.

This is definitely one for the Science geeks out there! It can be found on the roof of an old church on St Thomas Street close to London Bridge. It’s basically an old operating theater which is a little over 300 years old and has galleries perfect for those with an interest in science, surgeons and operations without anesthesia. It has a strange yet exciting atmosphere and I definitely recommend you stop by.

Of course it doesn’t really get any better for those with a passion for science than the Science Museum itself! Models, special exhibitions, steam powered machinery and entertaining shows about space in the Science Museum’s very own cinema.

The museum can get quite busy during the day and if you happen to miss anything due to the number of people visiting, you can always come back to it in the evening when there are fewer children around. Entry is free and there is so much to do that your visit could last a good few hours!

This is the perfect place to catch a bite to eat. The food is outstanding, the tables use touch service technology and you can even play computer board games whilst you’re waiting for your order! Once finished with your delicious food, you can then bring up an app with a map to plan your next adventure. It’s truly the sort of restaurant you would expect to find in Japan, yet it’s in Soho!

I know what you’re thinking, “Westminster Abbey, nerdy?!” What you probably don’t know is that Westminster Abbey is the resting place of the great genius Sir Isaac Newton! Of course it’s not just Sir Isaac that rests here and you can actually take a guided tour of the abbey.

For the movie lovers out there, there is no better place to catch the latest movie than on the biggest movie screen in Britain – the Imax in Waterloo! Just imagine it - you’re watching an incredible 3D movie which is made ten times more incredible by being played on a screen that’s as tall as five double decker buses! If you consider yourself a movie buff then you have to make sure you check this place out.

Imagine a street jam packed with people selling all sorts of rarities! Now imagine no more by getting yourself to Brick Lane on a Sunday. There are many interesting shops found on Brick Lane but on a Sunday there are all sorts of sellers looking to get rid of what they consider rubbish. But remember, one mans rubbish is another mans treasure! You can pick up anything from old VHS tapes to retro video games.

The name says it all! If you’re into all things fantasy, games and painting little warriors then this is the place for you! They hold role playing clubs, fantasy card games and all sorts of events for people with a passion for escaping reality to become a fearless swordsman or elf. Orcs Nest can be found in Earlham Street, West London.

So as you can see, there is a bit of something to satisfy the inner nerd in everyone. You also won’t help but notice the little tiled Space Invader paintings scattered all across London! The very best nerd spots are often the unheard of ones and there is absolutely no way that I have discovered all the best as of yet, just keep your eyes peeled for nice little gems because they’re all over the place!