When Apple introduced the first iPad in April of 2010 as the only tablet on the market, it represented a paradigm shift in how the Internet would operate, and the form in which future laptop and mobile devices would take. Since then, a range of other tablet devices have come onto the market, and whilst none of these are quite the same as the iPad, they now represent a realistic alternative - and often at a significant saving. If you're in the market for a tablet, but don't particularly want to go down the iPad route, check out these alternatives: 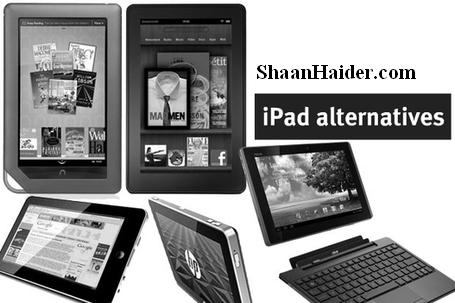 This Tablet features a tidy 7 inch screen, and also comes with an affordable price tag. It functions well and can do most of the things that an iPad can. The bookshelf interface is particularly eye catching and the integration with Amazon is a plus for book lovers.

If any Tablet is going to rival the iPad then the Samsung Galaxy Tab is it. Very easy to use, and offers a range of multimedia features. Whilst close in price to the iPad, it does have the one thing that the iPad doesn't - Flash compatibility.

A great tablet for any bookworm but it does have some multimedia limitations. However, for its price I would consider it pretty good value. It's also encouraging to see brands like Barnes and Noble embracing technology.

This is an awesome product.It has a quad-core Tegra 3 CPU, and also comes with an optional keyboard. It's pretty obvious that a lot of thought has gone into developing this product, definitely one of the fastest Tablets on the market.

This tablet seems to be very popular among business users. It has seamless integration and synchronization with other devices and is very user friendly. If you rely on being connected with your office, servers and remote files then this could be the right option for you.

If you're an entertainment fan, like gaming, movies and music then the Sony definitely ticks all the right boxes. It links with other Sony products, so would be a great investment for a casual or full time gamer. Possibly more suited to the younger market.

A great deal smaller than some of the others on the market, however it has a powerful processor and functions well. My own colleague has invested and reckons it was money well spent!

The first tablet with a slide out keyboard (kind of defeats the purpose if you ask me). If you need a keyboard though and don't fancy lugging your laptop around then I'm sure this is a good choice.

Last but not least is the BlackBerry Playbook, with this tablet you get the best of all BlackBerry services (include video chatting), and high functioning multimedia capabilities. Sales have been sluggish so far, but it is proving to be a great alternative to the iPad. Often the BlackBerry Playbook is given away free when you enter a BlackBerry Mobile contract. Worth checking out!

If you are considering investing in a tablet, do a bit of research. Check out some of the online forums or speak to someone who has purchased an alternative to the iPad.