Windows 8 beta was finally released and it’s more or less the version we’ll be seeing in the final release, so people are already testing it and even installing it as their main operating system – it works pretty well, actually, without any major glitches. The biggest change to Windows 8 from the previous version is the Metro user interface, which now replaces the start button and works sort of like an OS on its own. While desktop users have some complaints about the new interface, Metro UI is great on tablets and touch enabled laptops.

Metro UI features its own apps with an app store, and it looks like these apps will work well no matter what platform you have. As of now, there aren’t many apps on the marketplace – it’s still in the testing stage, but the ones that exist are pretty good. Here’s my selection of the best Metro apps currently available for Windows 8 : 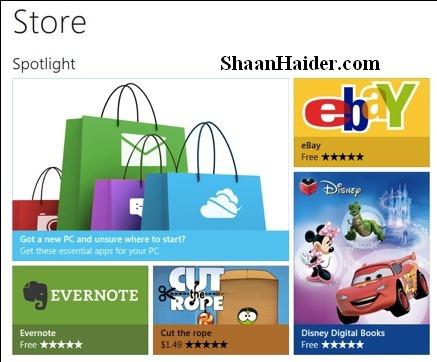 You might know the Sketchbook app from Autodesk – it’s one of the most popular sketching/drawing apps on the iPad and iPhone. Autodesk was also one of the first companies to release an app for the Windows 8 Metro UI as a demo, and it’s pretty darn good. It’s pretty basic, but it lets you draw anything you want, and it’s pretty easy to do it on a tablet using the touch screen, as well as using your mouse on a desktop computer – it truly shows that Metro apps can be useful in both cases.

Evernote is the leading note taking application, thanks to its unique combination of an online service and apps for pretty much all of the popular operating systems. This Windows 8 Metro app has been among the first to be released, and it pretty much mirrors the functionality of the app for the other platforms, with the changes being due to the Metro interface, of course. You can easily save notes of any kind, add descriptions, categorize the notes, and sync them with any other devices you might have that are running Evernote. You’ll need an online account to use the app, but the basic service is completely free and I’m sure you’ll like it.

This app is pretty simple in idea and execution, but it really shows that Metro UI can be used as the main UI and operating environment, even by those who need advanced features. The app is basically a photo editor, and it lets you do quite a lot of things with your images and photos. You can edit the picture, add filters and effects, then save or share the result with the world.ImageFX is unique to Windows 8, by the way, and you should definitely check it out if you installed the OS.

AccuWeather is one of the most popular weather applications for Android, iOS and Windows Phone, and of course the developer couldn’t miss the opportunity to jump on the new Metro UI bandwagon. The new Metro app looks quite nice, actually, and it’s a perfect replacement for the Start screen if you want something more informative on your display when it’s idling. You can see the current temperature for your city, weather forecast for the next several days, a satellite view of the current situation, and more.

Cut the Rope is one of the most popular games for the iPad, iPhone and Android devices, and the Windows 8 Metro version doesn’t disappoint, either. It’s basically the same game you’ve seen on tablets – the gameplay, story and physics are all similar. Obviously, if you have a tablet, you’ll know that the game is easy to play, but it’s also surprisingly nice on a laptop or desktop in full screen – using the mouse or even a touch pad doesn’t take away from the experience at all.

More developers are starting to work on their own Metro apps every day, and I’m sure there will be more than enough of them to satisfy everyone by the time Windows 8 officially goes on sale. If you installed the Consumer Preview version, you should definitely go to the Metro Store and check out the apps listed above – they’re pretty darn good.