It is the time of celebration for the Indian telecom brand Airtel as Barack Obama is having an Airtel number now. Sounds funny and weird, right? Well, it is. Actually a guy M Prasad from Andhra Pradesh in India, used the picture of Barack Obama to get a number of the Airtel. And the funniest thing is that the none of the Airtel staff noticed this blunder and even issued a number 9177523297 to him. 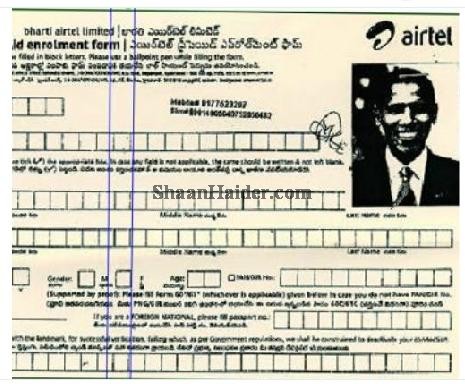 M Prasad used the driving license for the identification on which his image was very blurry. But somehow, a top police officer of his region came to know about this and asked the service provider to terminate service to the number of Barack Obama aka M Prasad.

The funniest thing is that the Airtel authority completely ignored the image of Barack Obama while issuing a telephone number to it. It shows that how poor is the process of issuing a new cell phone number to a user in India.

Barack Obama is a well known face worldwide and if people can use his image to get a cell phone number in India then, you can imagine what you can do with an image of common person. By the way, anybody tried using the image of Osama Bin Laden yet for any purpose? ;)