3 Best Tools for Building the iPhone Apps of Your Dreams


There were times in the past when there were only a handful of people in the technological community that could officially say they had built their own iPhone applications. However, those times are long gone, and it's now easier than ever for the average iPhone user to build their very own iPhone appfor use by other users. Many developers are now doing this by simply using iPhone app builders that come in many different varieties at this point. Specifically, these are 3 of the coolest and best iPhone app builders that users are taking advantage of these days to make their dreams come true.

Rhomobile is a versatile iPhone app builder that caters more to developers that have strong knowledge in the areas of HTML and Ruby. This is because all apps built with this tool are comprised entirely of Ruby and HTML coding! This versatile style for writing app coding isn't designed just for iPhone, either. It works for iPhone, Android, Blackberry, Windows Mobile and more.

The framework used for creating iPhone apps via Rhomobile is officailly called "Rhodes," and what's neat is that you can build for free as long as you leave your software open source with a GPLv3 license. You can also choose to go with a commercial Rhodes license which is $500/application. Server licenses are also available, but their cost varies according to how many users will be utilizing the software via the server.

Anything is possible with this builder; you can design your app to integrate with Facebook, connect to outside sources, work with ecommerce, etc. You can also market it just like any other app. Rhomobile is definitely worth a look. 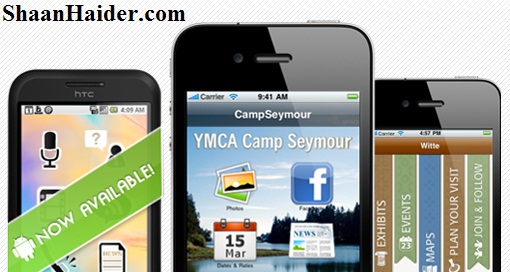 Sweb Apps is a greatiPhone app builder service that is designed with those in mind that have little to no knowledge about coding or programming small business mobile applications. With Sweb Apps, you can choose from various templates such as restaurant, business, retail and more. Once you've chosen your template, it's time to personalizing and making the app your own. What's also cool is that Sweb Apps also supports building apps in Android so that you don't lose out on half your market.

Each application build requires an initial fee of $50 and an ongoing monthly fee of $25 for hosting. Depending on how long you expect the app to be around and what you expect to do with it, your price will either be relatively low or high.

Sweb Apps can also socially integrate which is great for your users as well as your visibility. Sweb Apps is the way to go if you're inexperienced or need to get an app out quickly.

Also Check : HOW TO : Create Android Apps for Your Blog without any Coding

As you've probably guessed, GameSalad is marketed more towards those who have games in mind when it comes to building an iPhone app. GameSalad offers a visual editor that's very easy to use and requires no knowledge of coding or programming. Simply use the simple, drag-and-drop interface to create any game you can think of.

At this point, there is no other mobile platform supported besides the iPhone (unless you go Pro), but the price for development is pretty nice. You can either decide to go with the Basic version for free or the Professional version for a steady $299/year. The package you choose truly depends on what your plans are for your app.

GameSalad's app creator has support for Twitter integration but Facebook may be more difficult to integrate with. The Pro version of GameSalad's app creator offers many ways to help your app survive in the app store, so it may be smarter to just go with the paid version. This is definitely one of the best apps out their for game app creation on the iOS