What happens when an consumer electronics brand, love struck couple and a flash mob com together for a cause? LG World Record Team recently helped a guy Karan Arora, to propose a marriage to his girlfriend Pooja Basara. 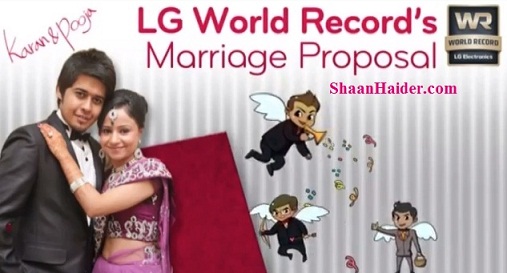 LG has recently made a post on its Facebook page about this event, and uploaded a video of the flash mob that is going viral on YouTube even as you read this. Even though the unauthorized versions of the flash mob were doing the rounds on the net for some time, LG’s official release of the event and behind the scenes video on the making of the act helps tell the entire story of the unique event.

Though the entire Flash mob activity lasted a little less than twenty minutes, the preparation and execution took more than a month and the involvement of dozens of people at various levels.

The flash mob activity was well planned and it involved around hundred professional dancers, who trained with famous and professional Bollywood choreographers for this particular event. Later around 300 spectators also joined the dancers at the venue, Ambience Mall at Gurgaon, India.

With LG WRman Sherlock and Greg playing modern day Cupid, the lover boy surprised his unsuspecting lady love with a blitz public event amidst spontaneous cheering and euphoria amongst the spectators.