HOW TO : Get iOS 7 on Old Unsupported iPhone and iPod Touch

One thing which every smartphone user loves is the frequent software updates bringing new features and performance enhancements to their devices. But the release of the iOS 7 disappointed many iPhone users as the new iOS 7 update will not be available to the older iPhones like iPhone 3G and iPhone 2G.

So if you are having an old iPhone 3G or iPod Touch then, you are out of luck as Apple is not going to provide any official upgrade to these devices anymore. But if you are still in love with your old device and want to enjoy the features and look of the iOS 7 without buying an iPhone 5S then, here is a good news for you.

Whited00r is out with their brand new product Whited00r 7 which will bring the looks and feature of the iOS 7 on the devices running old hardware and having no support available from the Apple officially. So, now you can get the iOS 7 on your old iPhone 2G, 3G, iPod Touch etc 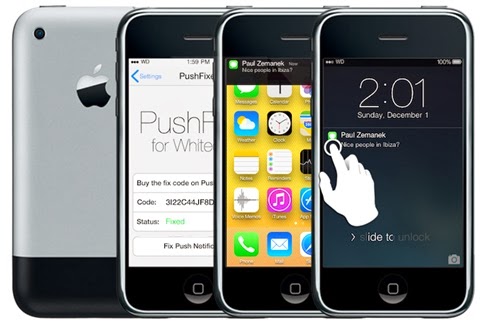 Whited00r 7 is designed to perform fast on older device without using so much of hardware resources or slowing the device down. Instead of just the skin, Whited00r 7 brings the iOS 7 styled camera, Control Center, multitasking and many other features of iOS 7 on older devices.

Whited00r 7 supports the ARMv6 CPU. So all devices running on this processor like iPhone 2G, iPhone 3G, iPod Touch 1G and iPod Touch 2G are supported.

One of the best thing is that it comes pre-loaded with the App Store and the Cydia. It is also having a new feature called AppTimeMachine. As the name suggests, it is designed to preserve older versions of iPhone apps that have since dropped support for older hardware.

I think, now you are having enough reasons to give Whited00r 7 a try on your old iOS device.

Just visit the link whited00r.com/installation to get started and installing the Whited00r 7 on your old iPhone to get the iOS 7 on your old and unsupported iPhone 3G, iPod Touch and other devices.