HOW TO : Mute A Twitter User and Hide their Tweets from Timeline Without Unfollowing Them


Twitter is a great social networking site and having lost of nice features. But one thing people always complain about is that Twitter is very crowded and noisy, specially if you are following lots of people. Twitter tried to solve this issue by providing an interesting feature like Twitter List. But still it is not good enough for many people.

There are few nice Twitter clients which are offering the “Mute” feature since a long time. Using this “Mute” feature you can mute the tweets of a particular user from your Twitter Timeline without unfollowing that user. It is really helpful if you do not want to unfollow a Twitter user but also do not want to see that person’s tweets in your timeline for some reason.

And finally Twitter included the same feature silently in its interface too. So now you can easily remove a Twitter user’s tweet from your timeline without unfollowing them. It will surely help in getting more useful tweets of your interest. But there are few points which you need to keep in mind while muting a Twitter user.

- You can also mute a user you do not follow.

- All @ replies and @ mentions from muted users you follow will still appear in your Notifications tab.

- If you mute a Twitter user, their previous Tweets will still be displayed; only their Tweets from the moment you muted them will be hidden.

Just follow the instructions given below on how to mute tweets of a Twitter user without unfollowing them and feel free to share your views about this new Twitter feature in the Comments section.

HOW TO : Mute A Twitter User and Hide their Tweets from Timeline

1. Go to Twitter.com and then click on the “Home” tab to go to your Twitter timeline to select a user whose tweets you would like to mute.

2. Now, click on the “More” link on any of that user’s tweet to show more option available.

3. From the options shown in the drop-down menu, click on the “Mute @TwitterUsername” option to mute that user.

4. You will also see a confirmation message saying “You will no longer receive Tweets from @TwitterUsername in your Timeline”.

5. Or you can just directly go to that person’s Twitter profile whose tweets you want to mute. After opening the profile, click on the gear icon as shown in the image. 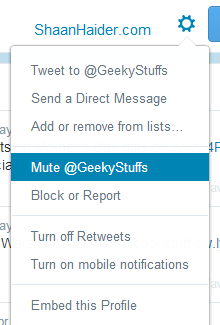 6. From the options available, just click on the “Mute @TwitterUsername” option to hide tweets of that user from your timeline.