I don't know, one of the many reasons why we buy an Android smartphone is because we can keep in touch with our Twitter and Facebook friends, i know i do!

Currently there being a load of Twitter clients available on the Google Play Store it becomes difficult for a newbie to choose which of the Twitter client for android suits his device the best, so here i bring to you the 10 best Twitter clients for Android. 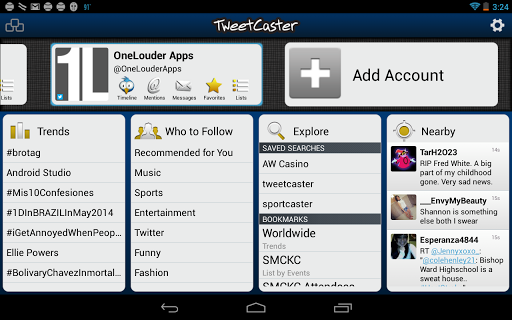 This is an ultimate Twitter client and is used by many because of its really cool UI plus its many features which makes tweeting a lot more easy and fun. Its interface is very nice and clean, probably the best out there, and you also get many themes to choose from. This app is so popular that it has also been reviewed by the guys at CNET.

The highlights of this app are inner circles which is similar to Smartlists found in Tweetcaster, mute users and certain hashtags, cross posting to Facebook and Twitter, customize menus (in short make your own ubermenu), livepreview which is a small browser built into the app so that you can view links, photos and videos without leaving the app, shrink links, tweet longer, etc.

Plume is a very simple Twitter client and very fast too. It was first known as Touiteur but was later changed to Plume. I currently use Plume Premium because it is quite quick in pulling tweets and as i have a quite poor data connection, it becomes the perfect app for me. The UI is very gorgeous and you also get the option to colorize tweets from different users so the app looks very colorful.

Plume also has many other features (and rather even more), you would look for in a Twitter client such as internal browser, mute users, manage multiple accounts, pull to refresh, autocomplete usernames, swipe to scroll, bit.ly support to tweet longer, geotagging feature, etc. 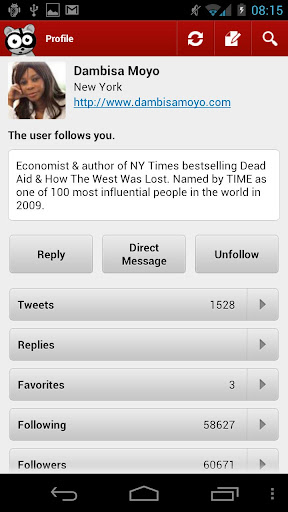 Seesmic offers you to manage both Twitter and Facebook accounts simultaneously, if you are a pro user, you will find this app very helpful. It has a very cute UI (red and white), and I really like the koala bear icon. You can see both your Twitter feed and Facebook feed, and simultaneously manage both the accounts. Add a status on Facebook or tweet on Twitter, Seesmic handles the tasks really well without being a memory hogger.

In addition you also get the advanced tweeting features such as tweet longer service, url shortener, share photos and videos, preview pics, autocomplete usernames, geotagging and retweet with comment.

Tweetdeck manages more than your Twitter and Facebook accounts, you can also handle Google Buzz and Foursquare account. There is no other Twitter client which gives you such flexibility in managing your Columns like Tweetdeck does. You can add, delete, move any column you want very easily. The refresh feature on Tweetdeck needs a little tuning but apart from that it is a full featured Twitter and Facebook app.

Geotagging, adding pictures to tweets, awesome UI, and widget support is what makes Tweetdeck really stand out of the crowd.

Hootsuite also allows you to control multiple social networks, namely Twitter, Facebook, LinkedIn and Foursquare. This is also a very neat social client, perhaps recommended if you are a social media person and a power user who needs to manage multiple accounts from a single app.

You can schedule your tweets, receive notifications and access your Twitter stats such as total clicks and impressions on a tweet, and swipe to scroll are other major features of this app. 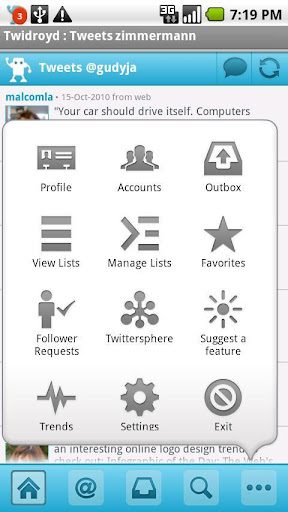 Average in looks but powerful in features. Twidroyd is popular among many, and this Twitter client gives you all the necessary functions for tweeting. Tweet longer, URL shortener, manage multiple Twitter accounts, Twitter trends, smart lists, preview pics are some of the highlights of this app.

Wait a minute, and best of all no ads, that's right and its completely free as well. There are very few apps these days which have no ads but still are free, perhaps we should thank such developers, shouldn't we?

Twicca is yet another Twitter client for Android. Sleek UI, advanced features and the option to install feature specific plugins. Twicca is nearly the complete Twitter client you could get. It has numerous features and plugins for Twicca are available on the fly. Some of the many plugins include Twitpic plugin for Twicca, translate plugin, highlight to search plugin, draft plugin, etc.

Its easy, you decide which functionality you want in your Twitter client and trash the rest. Only con is, it is a little bit slow on pulling tweets, apart from that i would personally recommend this app for you.

How can we forget the official Twitter client for Android? Real time notifications, retweet with comment, trending topics and twitter's very own UI, what more could you want? Regarded as certainly the best client for an average Twitter user this app is hard to resist.

But there are a few other cons as well, no twitlonger service, no scheduler or url shortener and many other features are missing in this app. So its really upto you to decide if you want additional tweeting features or are satisfied with the features the official Twitter app has to offer you!

I heard about this app from one of my friend. Ok in the UI, not that great but leaves a very small memory footprint. This app is for users who just want the simple tweeting features and nothing else. Dabr is fast and very basic, limited features and a very light app, just 108kb in size.

I guess its upto you to decide which Twitter client is best for your tastes, a balance of UI and features then I would say to go for Tweetcaster, Ubersocial or Plume. If you want to manage multiple social accounts then go for Seesmic, Tweetdeck or Hootsuite and if you want access to extraneous set of tweeting features then I had to say Twidroyd or Twicca.

If you are an average tweeter, who wants simple and basic level features then better go for Twitter or Dabr.

Hope this article was useful to you. Please make your comments as your personal opinions are very valuable to us. Thanks!

Written by Gautam Doddamani who blogs at his official site REVTHATUP.com and is a technology enthusiast. In his past time he loves to code and also test out new custom ROMs on his Droid. By the way he tweets a lot too, follow him on twitter Crysislevel to get to know the guy.