Samsung is going to launch the Galaxy Note 4 on 3rd September , 2014 at the Samsung Unpacked 2014 Episode 2 event. This is going to be a huge event as it will be concluded simultaneously in three cities – Berlin, Beijing and New York. The event at the Berlin will be the global one.

Samsung has already sent the invitation to media persons to attend the Unpacked Episode 2 event clearly giving the hint that it is going to be all about the next Samsung Galaxy Note 4. It is also interesting as Samsung is having this event right before the IFA 2014 which is going to be started from 5th September and it will be finished on 10th September, 2014. 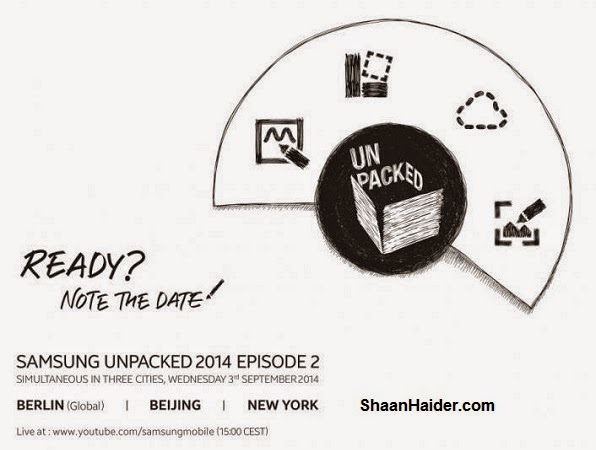 Since last few weeks, lots of leaked images and information are coming out regarding the hardware specs, design and features of the Galaxy Note 4. According to all those leaked information available, Galaxy Note 4 is going to have the Super AMOLED Quad-HD 5.7 inch screen display boasting the resolution of 1440 x 2560 pixels like the recently launched LG G3 smartphone.

The speculation is that Galaxy Note 4 will sport latest quad-core Snapdragon 805 processor clocked at 2.5 GHz and octa-core Exynos 5433 processor. Also chances are that maybe Samsung Galaxy Note 4 will be coming with a 64-bit processor for an amazing performance along with the a huge 4GB RAM.

The camera of Galaxy Note 4 is expected to be a 16MP with the Optical Image Stabilization and quad-HD 2160p video recording. According to the leaked pictures of Samsung Galaxy Note 4 , it is supposed to have a heart rate sensor as well. So, all these features are going to make Galaxy Note 4 a major release for all gadget lovers and the Samsung Unpacked 2014 Episode 2 will be a must watch event for sure.