Samsung Galaxy Note 4 is going to be released officially on 3rd September at IFA but recently few images of the device got leaked and surfaced on the Internet. Unlike other leaks, these images are kind of reliable as an image of the retail box is also leaked along with the front and back of the Samsung Galaxy Note 4. 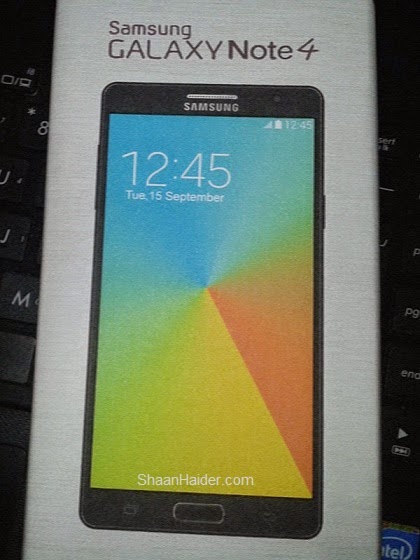 Samsung Galaxy Note 4 is going to have the 2K display having 2,560 x 1,440 quad-HD resolution screen which is already available in the latest LG G3 smartphone. According to the source leaking these images, Galaxy Note 4 will be of same size as Galaxy Note 3. So, the next Note device will boast a 5.7 inch screen size.

The design of Galaxy Note 4 is very much similar to the Galaxy Note 3. The stitched faux leather back panel design of Note 3 is replaced with a new leather textured plastic back panel. Also, a heart rate sensor is placed next to the rear camera. 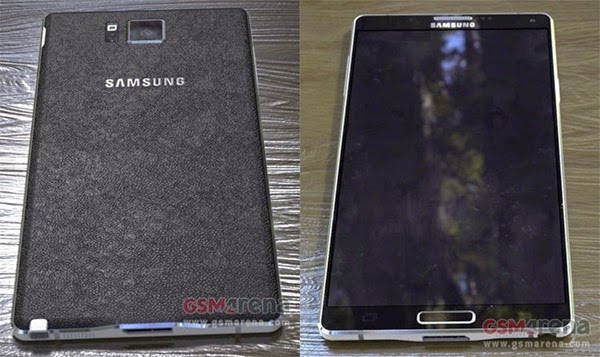 S-Pen slot is at the bottom edge at the back of the Galaxy Note 4, just like the previous Note series smartphones. You can also find the speaker and the MicroUSB 3.0 port next to the S-Pen. It is being expected that Galaxy Note 4 will be running on the latest Snapdragon 805 or a 64 bit Snapdragon chipset with 3GB of RAM.