Google announced a little while ago about the Nexus 6 smartphone which will be produced by the Motorola. Nexus 6 will be running on the Android 5.0 Lollipop and this phone will be the first one to carry this version of the Android. Android Lollipop will provide you the new icons and lots of new features .

Nexus 6 is the first phone of the Nexus series which totally comes under the category of phablet as the screen size is six inches, even larger than the iPhone 6 Plus and Samsung Galaxy Note 4. But the screen will be having a better degree of clarity with sharp Quad HD screen and 496 pixels per inch density. 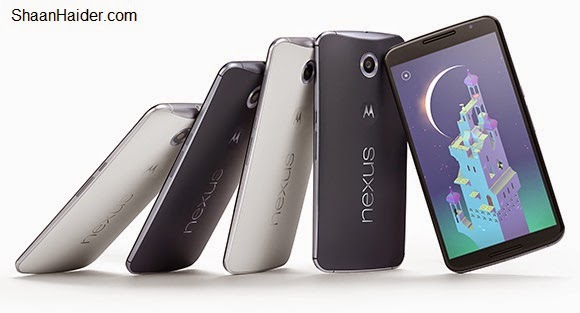 Nexus 6 will sport a rear camera of 13 megapixel having Optical Image Stabilization, HDR+ , dual LED flash and f / 2.0 aperture and 2-megapixel front camera for taking selfies . You will find two speakers at the front for your entertainment . On the hardware end, you will be pleased to have the Snapdragon 805 quad-core 2.7GHz processor and the Adreno 420 GPU to provide you a great multi-tasking and gaming experience.

This huge device is also having a bigger battery of 3220 mAh capacity. Nexus 6 comes with a new feature “Motorola Turbo Charger” which will give you six hours of battery life by charging the device just for 15 minutes.

There will be two versions of Nexus 6 based on the internal memory - 32 or 64 GB versions . The pre-order for the Nexus 6 starts on 29th October and the device will be available officially in the first week of November.