Apple launched the iPhone 6 and iPhone 6 Plus few weeks back. Since then Apple was being criticized for launching iPhone with a screen size of which they always make fun of. And then iPhone 6 Plus Bendgate thing happened which affected the sells of iPhone 6 Plus a lot initially.

Now it’s a month since the iPhone 6 and iPhone Plus came out and now Apple is going to launch its another group of products in an upcoming event. Apple has announced that it will be conducting a special event on 16th October, 2014 at 10 A.M PDT. 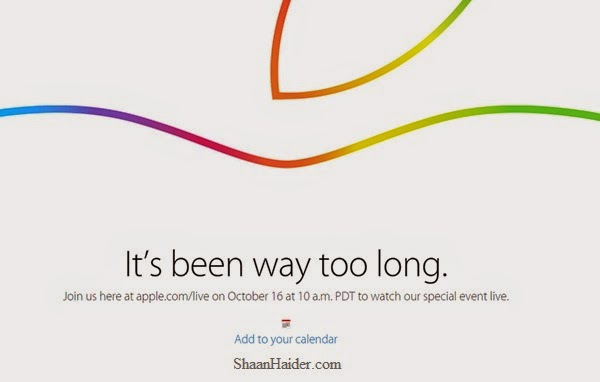 As you can see in the above Apple invitation, the tagline says “It’s been way too long”. Tech enthusiast and Apple lovers are assuming that this Apple event will be about iPad, OS X Yosemite, iOS 8.1 and perhaps new Macs too.

It is also being speculated that the iMac will receive a Retina display finally this time. Also the new version of Apple Mac Mini will be launched at the iPad Air 2 launching event as well. On the software side, OS X Yosemite is what everyone is expecting to be launched officially at this event as well. Hopefully also we will see the iOS 8.1 coming out at the very same event.
Just like the launching of iPhone 6 and iPhone 6 Plus, Apple is going to broadcast the live stream of the iPad Air 2 launching event on its website. To watch this event and Apple keynotes, all you need to do is to visit the live stream page by clicking on the link given below on any of the supported devices mentioned.

To watch the Apple iPad Air 2 launching event live stream online live on the official Apple website, you will need to have the Safari browser version 5.1.10 or later on OS X v10.6.8 or late on your Mac. If you are planning to watch iPad Air 2 launhcing event live stream online on your iPod Touch , iPhone or iPad then you need Safari on iOS 6.0 or higher version. And if you are having an Apple TV then, it should be a second or third generation Apple TV having software 6.2 or later.