Hope that you remember the controversy started with the bend test of iPhone 6 Plus. We also do such tests sometimes while reviewing smartphones. You can find few of those videos on Geeky Stuffs YouTube channel.

You will find lots of drop tests videos of various smartphones and most of them are pretty much similar. Due to this Urban Armor Gear Inc. thought to do something different. If you do not know Urban Armor Gear Inc. is the manufacturer of few of the toughest smartphone cases for high-end smartphones and tablets. So, they just planned to do a new kind of drop test for advertisement purpose. 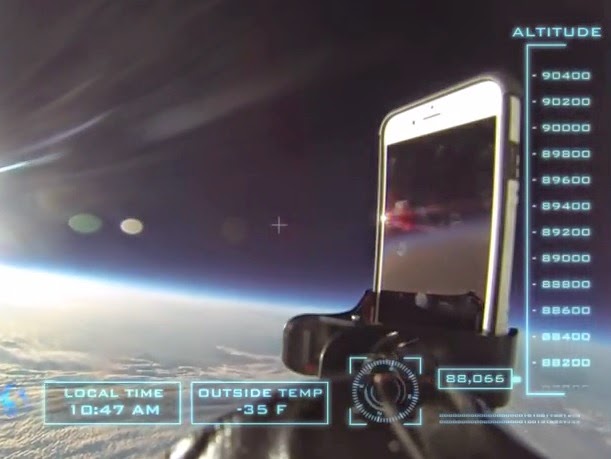 The iPhone 6 was sent into the space using a weather balloon and the video of the entire test was recorded using GoPro cameras. Also a GPS tracker was attached to the device in case the iPhone got lost on its way back to the Earth

The iPhone 6 was sent to a height of 101,000 feet above the ground level. On the way back to the Earth, iPhone 6 had to face the wind speeds of up to 70 miles per hour and temperatures as low as –79 degrees Fahrenheit.

Once the device reached the surface and collided to it, the Urban Armor Gear Inc. composite case was strong enough to protect the iPhone 6’s external body and component from falling apart. But they did not show in the video that whether the screen was smashed and the device switched on or not after hitting the ground? Though it was claimed by Urban Armor Gear Inc. that device booted up and worked properly after this extreme iPhone 6 drop test.

What do you think about this claim of Urban Armor Gear Inc. that after this drop test and hitting the ground iPhone 6 was good enough to work properly? Watch the video and decide by yourself. And feel free to share your views in the Comments.