Voice commands on the smartphone are getting more and more popular these days. Apple iPhone comes with Siri, Microsoft’s Windows Phone OS got the Cortana and the Google’s Android boasts the Google Now. Due to popularity of these voice command virtual personal assistants, even app developers are taking them seriously and integrating their app to work with these smartphone virtual assistants.

Windows Phone’s Cortana comes with the passive-listening feature using which you can just say “Hey Cortana” to activate it. The very same feature is available on Google Android’s Google Now as well. The keyword here is the “OK Google”. To activate the Google Now using the voice command, you have to go to the home screen and then just say “OK Google” and the Google Now Voice Search will be activated.

But what if you want to use this feature from any screen of your Android phone instead of the home screen. For example, you are using a social media app or texting to a friend and want to activate Google Now with voice command without leaving the current app and going to the home screen.

1. Open the Google Now on your Android device.

2. Tap on the hamburger icon to open the menu.

3. Now, tap on the “Settings” to open the Google Now settings. 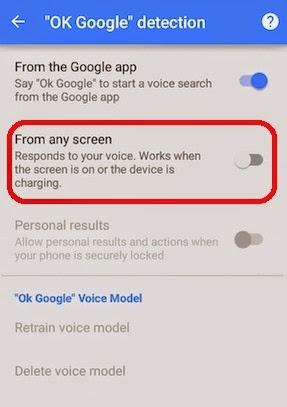 4. Go to the “Voice” and then tap on the “OK Google detection” option to open it. You will find the option available for the voice activation of Google Now.

5. Tap on the slider next to the “From Any Screen” option as shown in the pic. A splash screen will appear on the screen that you are going to enable this feature and you will be able to activate the Google Now by saying “OK Google” from any screen, using any app and even when the phone is locked. 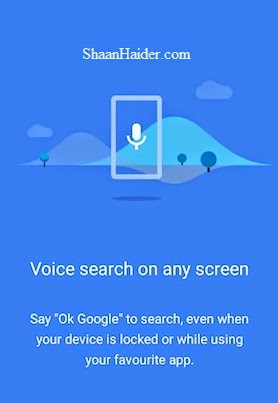 7. On the next screen, you will have to train your Google Now app to respond to you only when it listens “OK Google” as this feature will unlock your phone when it is locked and a voice command is given. Just say “OK Google” three times and you are good to go.

Now you can start using the Google Now throughout your Android device from any screen, using any app and even when the screen is locked. Just say “OK Google” anytime and the Google Now Voice Search will be activated.


Posted by Shaan Haider
Categories : Android, Google, How To :