Huawei recently unveiled its latest flagship device Mate 8 which comes with impressive hardware and design. We have posted an article covering all of the features and hardware specs of Huawei Mate 8. Other than the OS, user interface and camera performance, CPU and GPU are both improved as well in Huawei Mate 8.

We have seen the AnTuTu becnhamrking score of Huawei Mate 8 in the previous leaks few weeks back. It was a whopping 79,131 at that time which is way ahead of the latest flagship devices like Samsung Galaxy S6 that scores around 68,000. 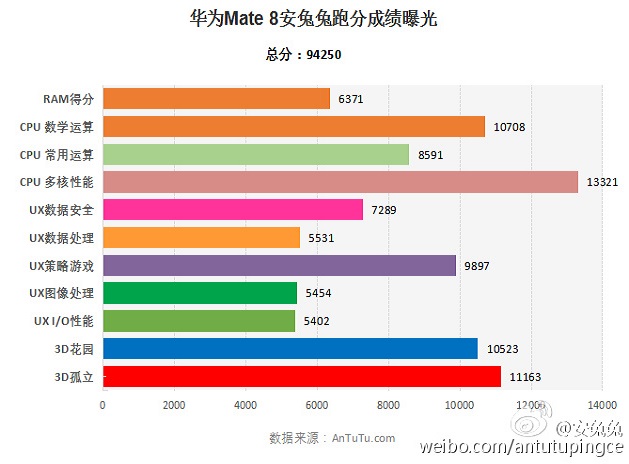 
We have also seen a recent leak regarding the Samsung Galaxy S7 which shows the AnTuTu benchmarking score of Galaxy S7 as high as 10,3692 on Exynos 8890 processor. But later it came out that the score was not of AnTuTu benchmarking but Ludashi/Master Lu benchmark. So we can assume that if this score of Huawei Mate 8 is real then it is the higehst so far for all the smartphones available in the market.

Huawei Mate 8 comes with a comparatively poor GPU and if that was not the case then the score would be much higher for sure. Still it is really a high score and we would love to check it by ourselves that how good Huawei Mate 8 is going to perform in real life scenario instead of the benchmarking tests.

Though Huawei Mate 8 still comes with a Mali-T880 MP4 which is not the best in the market, it would be good to see how nice it really performs with a better CPU and OS. And we will be doing the detailed benchmarking test of the device once we review it.