Consumer Electronics Show 2016 is going out currently and lots of new devices are being launched at the event. Huawei globally launched its previously announced flagship device Mate 8 at the CES 2016 along with the new series of Huawei Watch and Huawei MediaPad M2 10.0 tablet. Also a new color version of Nexus 6P, the Matte Gold, is launched by Huawei at CES 2016.

The new series of Huawei Watch is designed for the fairer sex. The Jewel and Elegant versions of the Huawei Watch are crafted with Swarovski-made Zirconia and feature a premium Rose Gold case as well. Also, there are lots of Watch Faces provided specially for the female users.

Huawei Mate 8 is one of the best smartphone available in the market currently and it is having the tag of highest score ever achieved in the AnTuTu benchmarking test under its belt. We have already covered about the Huawei Mate 8 and all of its features and hardware specs in a previous article and you can have a look on it by clicking the link given below. 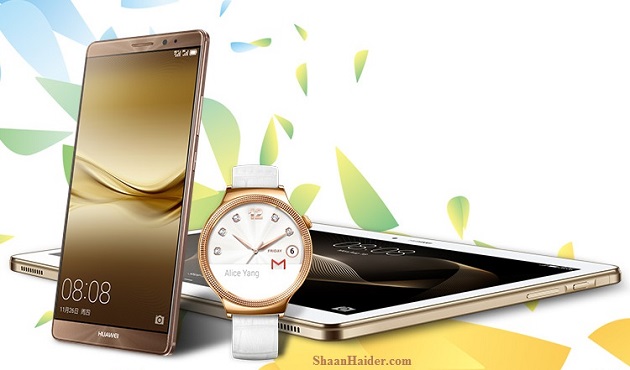 A brand new tablet, Huawei MediaPad M2 10.0 is also launched which is a 10-inch tablet with stylus support and strong focus on the audio quality. Huawei par collaborated with Harman/Kardon and brought a 4-speaker, 4-watt setup in their latest MediaPad tablet to provide a great sound quality.

Two speakers are designed to enhance the Bass sound and two are used for the Treble. The stylus let you perform lots of task like drawing on the screen, taking screenshots quickly etc. The fingerprint scanner provided is multi-featured and let you perform more tasks than just unlocking the device, just like Huawei Mate S.

The complete list of all hardware specs and features of MediaPad M2 10.0 is given below.

Huawei MediaPad M2 10.0 will be available in Luxurious Gold and Moonlight Silver colors.