Lenovo is coming out with lots of interesting smartphone and getting popularity in the mid-range smartphone market. At the CES 2016, Lenovo officially announced that will be making the very first consumer-ready Project Tango smartphone.

Project Tango is about the performance of the sensors and it combines the data captured by camera, gyroscope, and accelerometer to estimate six degree of freedom motion tracking, providing a user the ability to track 3D motion of a device while creating a map of the environment at the very same time. 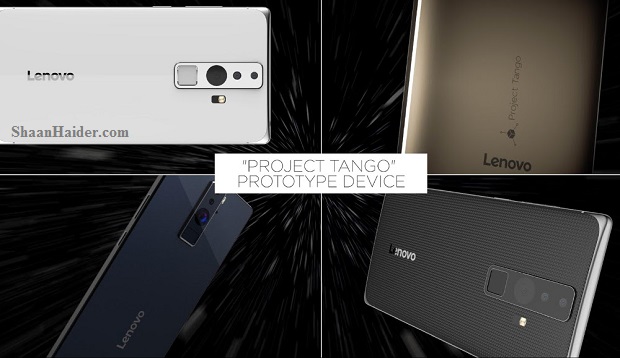 Lenovo is not finished with the final design of the Project Tango smartphone yet and they showcased a prototype of the device at the CES 2016 event. It is confirmed that the device will be powered by the Qualcomm Snapdragon processor and the screen size will be less than the 6.6-inches.

Google announced in its last year’s I/O event that the Qualcomm Snapdragon process for the upcoming Project Tango will be of Snapdragon 810 series. Looking at the prototype images, it is expected that this device will have a fingerprint scanner too.

To break new ground in today’s hypercompetitive smartphone and tablet industries, we must take innovation risks – it’s the only way to truly change the way people use mobile technology. Together with Google we’re breaking down silos by working across mobile hardware and software. Turning our shared vision into reality will create a more holistic product experience that captures the imagination of today’s consumer.

With Project Tango, the smartphone becomes a magic window into the physical world by enabling it to perceive space and motion that goes beyond the boundaries of a touch screen. By working with Lenovo, we’ll be able to make Project Tango more accessible to users and developers all over the world to both enjoy and create new experiences that blends the virtual and real world.

Qualcomm Technologies is very pleased that Lenovo and Google are bringing a Project Tango-enabled device to the mainstream so that consumers can experience a whole new level of advanced connected mobile computing apps and services across video, imaging and graphics.Qualcomm Technologies has a rich and long history with working with the developer community to ensure that all of the experiences that Project Tango and Lenovo are set to deliver are optimized for the Snapdragon processor.