It is getting pretty common to see brands making fun of other brands in their advertisements and recently there were few moments when brands started doing the same with another brands on social media. Nearly all of the smartphone brands made fun of Apple on Twitter when the iPhone 6 Plus BendGate happened.

And the latest in the list of such incidents is the Samsung vs LG. Though it is Samsung taking initiatve always to make fun of its biggest rival Apple, this time it is LG doing it to Samsung Mobile. Samsung recently posted an image on Twitter highlighting the Fast Charging feature of Samsung Galaxy S6 Edge Plus that how it can be charged from zero to full in just 90 minutes.

USA team of LG Mobile noticed this tweet by Samsung and replied to this tweet with a clever response stating that the LG V10 comes with a removable battery and can go from zero to full instantly simply by exchanging the battery of LG V10 with a fully charged another battery. 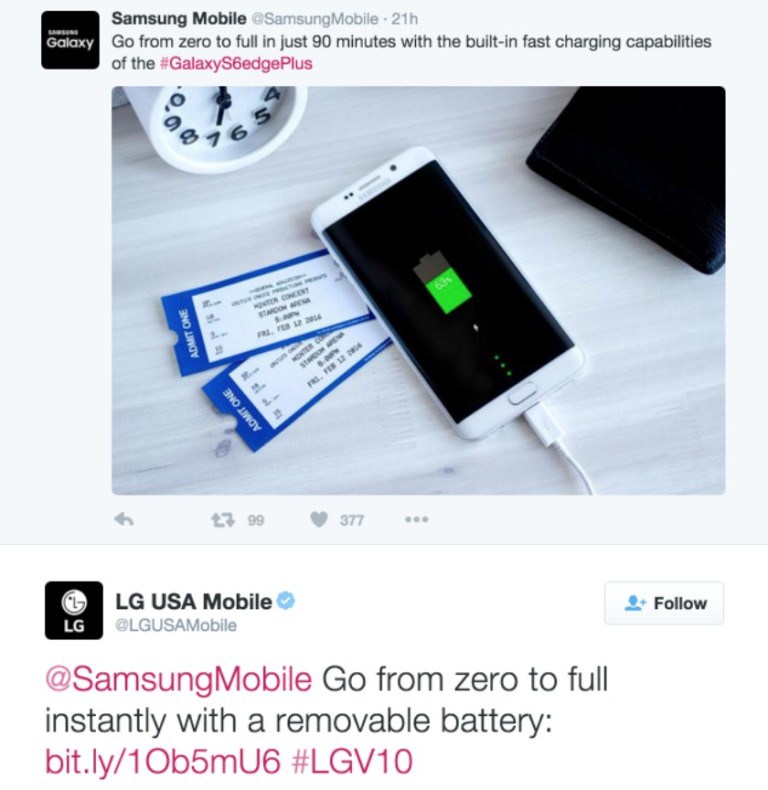 This is a feature that is missing from the Samsung Galaxy S6 Edge Plus and LG found Samsung's tweet to be the perfect way to advertise about LG V10 as they hashtagged the tweet and also included a product link in their tweet to grab maximum attention to their product.

From a user point of view, both of these two devices are pretty good and comes with their own pros and cons. It is totally upto a user prefernce that whether he would like to carry a charger or an extra battery to keep his smartphone alive as none of these two options are perfect. But still it is funny to see smartphone brands pulling each others leg and making fun of them openly in social media.