HOW TO : Install Windows 95 on Apple Watch


Microsoft Windows 10 is the latest version of the Windows OS and it came a long way since its origin. If you are not so young then, chances are high that you had the opportunity to try your hands on the older versions of Windows like Windows 95, 98 etc.

Old Windows versions are extinct now and now there is no official support available for even Windows XP that was once world’s most used Windows version. So if you feel nostalgic about them then, you are not the only one. 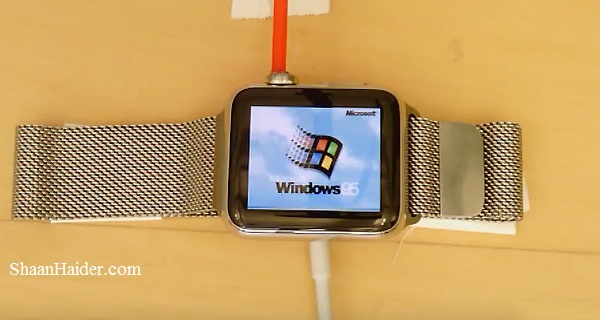 A hacker invested good amount of his time and skills to hack Apple Watch and run Windows 95 on it. He also documented the process of running Windows 95 on Apple Watch in a video. Though it sounds a bit stupid to run a whole computer OS on a smartwatch, but remember that Apple Watch comes with the hardware specs much more than the minimum requirements of Windows 95.

So the hacker just patched files within a WatchKit app and made the Windows 95 up and running on the Apple Watch. Though it was a not so smooth in appearance but still very much functional.

There were few problems faced by hacker while working on this project. To prevent the Apple Watch display from falling asleep when not in use. he used a motorized tube to the Apple Watch’s crown to keep it in motion continuously. By that way, he was able to prevent the screen from going onto standby.

You can watch the below video in which the developer Lee has shown the Windows 95 running on the Apple Watch.


The developer has also shared the whole project online on Github. So If you would like to try to run the Windows 95 on your Apple Watch then, you can do that as well.

Posted by Shaan Haider
Categories : Apple, How To :, Windows