Since the launching, Samsung Galaxy Note 7 is in news and all for the bad reason of catching fire. There were lots of jokes about them coming out everyday and recently they made YouTube to remove a video of GTA gameplay showing Samsung Galaxy device used as a bomb. Well, you can still watch that video at the end of this article.

And now Apple iPhone 7 is catching the fire and facing the same issue, though in not the same quantity as the Samsung Galaxy Note 7. 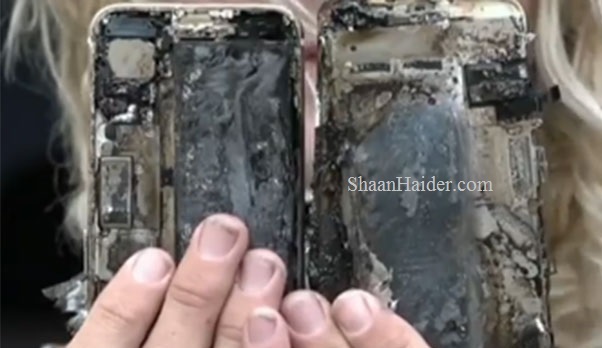 A report recently surfaced from 7 News about an Apple iPhone 7 catching fire in a car. Mat Jones, an Apple iPhone 7 user from Australia, has revealed that he left his iPhone 7 in his car under clothes and went for a surfing class.

When he returned back to his car after the surfing class, Mat discovered that his car was filled with thick, black smoke and the clothes he had covered his iPhone 7 with were on fire.

According to Mat, since there was no other source than the iPhone 7 in the car for starting the fire, he is confident that the fire was caused due to the iPhone 7.

He also claimed that his iPhone 7 was just a week old and he had not dropped it ever nor used any unofficial chargers that could cause the issues with battery and start a fire.


Someday iPhones are gonna explode too and Samsung lovers are gonna be like, "Samsung has had this feature for years" 😜😂 cc @SamsungMobileME

Even though the fire has destroyed a huge part of his car, there is no evidence yet to confirm that the iPhone 7 really exploded.

Apple is now involved in this incident now officially and will investigate the all possible events that led to the Apple iPhone 7 catching fire.