HTC recently launched the HTC Bolt or HTC 10 Evo recently. We were trying the device from the very first day and in this article, we are going to share the detailed hands-on review of the device for all readers of Geeky Stuffs.

This HTC Bolt / HTC 10 Evo review is divided in different section, covering pros and cons of each of them.

HTC Bolt / HTC 10 Evo comes in the standard HTC retail box, similar to previous HTC smartphones like HTC 10, One M9+ etc. We received our review sample in a special box, designed for review units. But the contents inside are same like the commercial retail box. 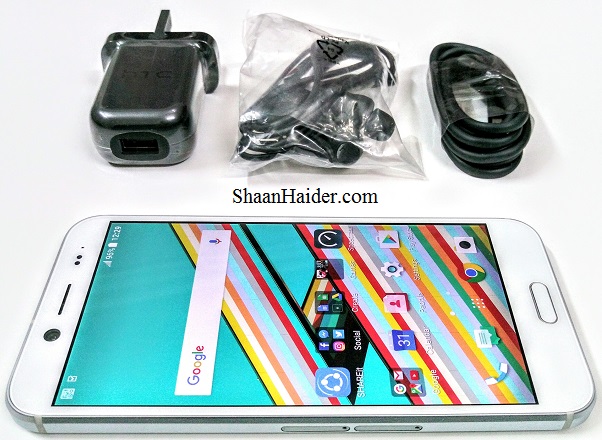 So inside the retail box of HTC Bolt / HTC 10 Evo, you will find a device, a charger, an adaptive earphone, a USB cable and SIM/memory card tray ejector pin along with some user manual etc.

HTC Bolt / HTC 10 Evo is very similar to HTC 10 in terms of design, specially from the front side. That is why, it got a similar name as well. On the front side, there is a big 5.5 inches screen along with a fingerprint sensor hidden in the Home key. Above screen, there are set of sensor, earpiece and 8 MP front camera is provided.

Volume rockers and power key is provided on the right and all of them are metal while power key is having nice and rough texture.SIM and memory card slots are provided on the left. At top, there is nothing and at the bottom there is microphone, HTC BoomSound speakers and USB Type-C reversible connector.

On the back, there is 16 MP camera with a microphone, dual-tone dual LED flash provided with HTC branding. The back is totally flat and got chamfered edges like HTC 10. The combination of chamfered edges and totally flat back provides a better grip than the curved back of HTC 10 and gives a very sturdy and kind of ugly look to the device.

There is no 3.5mm audio jack provided and the adaptive earphones comes with the USB Type-C connector. And this is a negative side of the design of HTC Bolt / HTC 10 Evo. Many people including me, prefer to use their high-end headphones on smartphones. Also, many people do not feel comfortable with in-ear headphones. So if you are one of those guys, you will have to get a USB Type-C to 3.5mm audio jack adaptor.

Overall design of HTC Bolt / HTC 10 Evo is nice and comes with the famous and great build quality of HTC. The full metal body is really strong and even though the device is big, you can easily handle it with one hand. The material used is of top quality and even better than few of the current high-end flagship devices.

HTC Bolt / HTC 10 Evo comes with a 5.5-inch Super LCD3 screen having 1440 x 2560 pixels resolution which will give you approximately 534 PPI pixel density. So, you will get the sharp display and will not find any pixels on the screen. The screen-to-body ratio is around 70% only and it makes the device a bit bulky.

The screen quality is great and it is bright enough to provide a nice sunlight readability and the viewing angles are also top notch. There is Night Mode provided that let you adjust the color warmth for easy viewing. You can turn on/off it manually or make it automatic based on the sunset/sunrise time.

HTC Bolt / HTC 10 Evo is a 4G LTE device. HTC Bolt is the USA only device available with Sprint exclusively and supports their next-gen 4G LTE speed. It sports the Qualcomm MSM8994 Snapdragon 810 Octa-core processor. Even though it is a great performer, it is the processor of last year's flagship devices and specs-oriented people can be a bit disappointed because of that.

The processor is supported by 3GB of RAM and an Adreno 430 GPU. So obviously, HTC Bolt / HTC 10 Evo is not the best of HTC or a flagship devices considering its hardware specs.

The device comes with IP57 certification for being water resistance and in our water test, it performed perfectly. The speaker got affected during the test but once the water evaporated after some time, the speaker quality and loudness was back.

You can watch our HTC Bolt / HTC 10 Evo water test video below.

Provided internal memory is 32GB and it is expandable using the dedicated microSD card slot. You can use a memory card of up to 256GB to expand the memory. Out of 3GB RAM, user available RAM is 2.7GB and around 1.2GB RAM was consumed already after booting up the device for the first time. And most of the time, you will find around 700-1000 MB RAM. Even though it doesn't sound much, it does not affect the performance of the device much. We were able to play few high-end games side-by-side, do multitasking without any lagging easily.

It comes with lots of sensors including fingerprint scanner, accelerometer, proximity sensor, gyro and magnetic compass. All of them perform good. Fingerprint ID is used only for unlocking the device and perform no other function than going to Home screen.

HTC Bolt / HTC 10 Evo comes with the latest Android 7.0 Nougat OS on top of feature rich HTCSense UI. HTC BlinkFeed is provided and HTC really need to get rid of it now. There is the amazing Freestyle layout that brigs the customization of HTC smartphones to a new level. Also being an Android Nougat smartphones, HTC Bolt / HTC 10 Evo comes with all latest Android features to improve the user experience. Some of them are Night Mode, Split Screen etc.

Panorama mode is having only horizontal capturing option but the stitching is top notch and one of the best among smartphones. There is a Selfie Panorama mode also available with Wide and Widest options to take panoramic selfies. It works nicely but you need some practice to use the Selfie Panorama in Widest mode.

The 16 MP primary camera is really good when it comes to image quality thanks to the combination of optical image stabilization, auto-HDR and phase detection autofocus. The images coming out of the primary camera are having great amount of details, very less noise, good quality color rendering and nice sharpness too. The low light imaging is very nice as well.

But 4K recording is limited to 6 minutes only. Also, there is no simultaneous 4K video recording and image capturing available. For that, you will have to scaled down to 1080p Full HD video recording.

Performance of front camera is good but in artificial light, the details are less. There is no LED flash for front camera but the screen flash works pretty good. Video recorded from front camera of HTC Bolt / HTC 10 Evo are good in quality with lots of details too.

Overall the camera performance is really good. Still images are of top class, 4K video recording with High-resolution Audio is nice, panorama stitching is great and the Pro mode provides lots of nice manual options. There are no fancy options provided that people use once in a blue moon and it is good actually instead of a downside.

HTC Bolt / HTC 10 Evo is having a 5.5-inch screen with great display quality. The big screen and nice display provides a nice experience of watching videos and playing games on this device. The speaker is very loud and clear considering its tiny size. So if you are going to use HTC Bolt / HTC 10 Evo for playing games, watching videos or listen music on speakers, you will like it for sure.

HTC Bolt / HTC 10 Evo comes with unique Adaptive Audio feature that let user create unique audio profiles to reduce the noise and provide better audio experience. For this, SONAR technology based adaptive earphones are provided. The BoomSound audio quality is brilliant coming out of the speakers and the best among any smartphones.

When it comes to gaming, HTC Bolt / HTC 10 Evo performs great because of nice hardware specs. You will not feel any lagging or frame drops while playing high-end games. The touch sensitivity is smooth and very responsive to enjoy the games perfectly. Also the sensors like accelerometer, gyro etc. perform very well too while playing games.

But the position of speaker is not good for gaming. If you play games in horizontal mode then, most of the time you will end up covering the speakers partially with your hand. This kind of distracts the user, so better to use headphones while playing games on HTC Bolt / HTC 10 Evo.

Another problem we faced while playing games on our HTC Bolt / HTC 10 Evo is the heating issue. It heats up while playing high-end games for long and also slightly, sometimes while charging the device or recording videos from camera. But it is basically due to Snapdragon 810, a processor infamous for heating issues.

When it comes to productivity, HTC Bolt / HTC 10 Evo comes with some nice features, thanks to HTCSense UI and Android 7.0 Nougat OS. There is Night Mode, various Motion Launch gestures, pre-installed Google productivity apps like Keep and Sheets etc. There is Split Screen feature that let you use two apps at the same time on screen.

The Ice View Cover is an accessory that we will highly recommend as it improves the productivity a lot while providing the great and solid protection to the device. Ice View Cover for HTC Bolt / HTC 10 Evo let user make, cancel and receive phone calls without opening the cover. You can see the notification and even read them fully right from Ice View cover without opening and unlocking your screen. It also let you directly launch the camera app without opening the cover and since the screen is visible when the flap is closed, you can capture images easily.

HTC BlinkFeed is there to provide all the latest updates from your favorite news sites, social media accounts and more. Personally, we do not like it much as the interface goes messed up if you add multiple data source to it. Fortunately, you are allowed to remove Blinkfeed easily if you do not like it.

There are lots of power saving modes provided as well to improve the battery life by reducing the features and hardware performance. There is also Fast Charging 2.0 feature provided to charge the battery quickly and the bundled quick charger performs nicely.

HTC Bolt / HTC 10 Evo is not a flagship device if we consider the old hardware specs. But if we talk about the performance, design, build quality, camera performance then it is still one of the better performing device in its segment. The screen is good, overall performance is nice, camera is brilliant and audio quality is the best ever.