LG Electronics (LG) announces the beginning of its exciting new LG OLED gaming tournament, where players from all over Saudi Arabia will have the chance to compete in 128 teams of six in a bid to win the grand prize. This tournament follows LG’s latest gaming competition, Spot of Triumph, where over 7,000 Saudi gaming enthusiasts had the chance to participate in a month-long series of gaming battles and challenges to win the top prize.

In its upcoming OLED gaming competition, LG has partnered with STC play for Call of Duty to present participants with six stages of single elimination, search & destroy games that run from the 15th to the 17th of April, where teams who win best of three matches are qualified for the semi-finals, and teams that win best of five get qualified for the final matches. The final match takes qualifiers to the Challenge Arena in Riyadh on the 22nd of April. The deadline to register is on the 14th of April, and you can register online here: https://www.lg.com/sa/lg-cod22/index.html 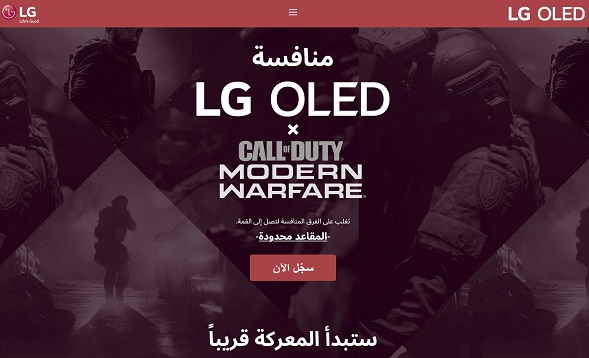 Throughout the battles, a range of premium prizes from LG are up for grabs not just for the participants of the tournament, but also to viewers watching the battles on LG’s social media channels. With gifts and giveaways worth 90K SAR, winners of the battle and viewers alike have the chance of winning prizes tailored for a perfect gaming experience through qualifying and winning the final matches as well as online polls and quizzes for those watching at home:

• LG OLED C1: commonly recognized as the best gaming TV, the OLED C1 is a 2-in-1 gaming TV that provides avid gamers with 4K gaming of up to 120fps – perfectly paired with the TV’s 1ms response time and G-sync and Free Sync features that offer unmatched coordination between the TV and your gaming console.

This competition is part of LG’s latest initiative to engage with gamers in Saudi and demonstrate the innovation behind its premium gaming products.