Facebook and Cars is a Match Made in Hell


Hands up if you think that what the world needs is more distracted drivers (or drivers who are more distracted, it works either way). Put your hand down if you raised it and feel ashamed of yourself. Countries all over the world are trying to take control of their drivers who seem hell bent on self- and other-destruction as they talk and text on phones, fiddle with their GPS and try to pay attention to what their kids are watching on the TV monitors in the backseats. So it doesn’t seem like a particularly good idea for Mercedes-Benz USA to launch cars with pre-loaded Facebook applications.

Yes, Facebook is nearly ubiquitous but that doesn’t mean we need it to truly become so. Isn’t it bad enough that your friends are updating their statuses and playing games while in the bathroom? Do we really want them finding out which Star Trek character they are or following the link that Jane is reading right now while navigating highways and school roads?

Would you feel the same way if your kids were in their car?

The annual Consumer Electronics Show in Las Vegas is big in the technology world. It’s where the who’s who of the industry get to meet and show off their new innovations, applications and gadgets. The spanking new inventions don’t have to be ready to launch – prototypes are perfectly acceptable. Merc’s Facebook service is a case in point. It will only be rolled out in 2013’s crop of cars. 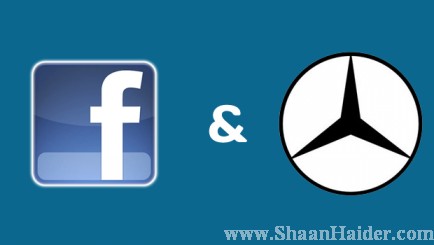 Facebook and Mercedes executives and spokespeople have taken pains to assure the public that the service is no more distracting than GPS. This begs the question: have these execs and spokespeople ever driven with a GPS? They’re fantastic devices when they work but hell on earth when they don’t – then let’s talk distraction.

It could be argued that the assurance that the service will not distract drivers is so much PR hot air. One is quite content to let the lovely lady who lives in one’s GPS fade into the background as she issues warnings about speed violations and upcoming turns. But when one is trying to find out what one’s friends are doing, one is likely to be more easily distracted. If one of your friends suddenly said, “Sally and I broke up after 10 years. I’m going to find some cheap beer and cheaper women,” you’d probably have a fairly dramatic reaction. Especially if your name is Sally.

Dan Rose, Facebook’s Vice President of Partnerships and Platform Marketing, has said that the move to include Facebook in cars is logical considering the variety and quality of screens and apps already available to drivers. His words were something along the lines of: people expect to be able to do more with the intelligent screens in their cars, so the world ought to expect car manufacturers to enable drivers to use those screens to connect to friends and be more social.

But just because something is possible doesn’t mean it should be done.

The automotive Facebook is a slimmed down version of the real thing. While the car is in motion, drivers won’t be able to enter text. But they can tap the screen and twiddle knobs to publish pre-written posts and achieve other such social things. Which isn’t distracting at all, is it?

One of the supposed benefits of the service is that drivers will be able to find friends who happen to be nearby or find nearby restaurants that their friends have ‘liked’. So, we need never have to plan ahead ever again.

Is this a good idea or a misguided attempt to cash in on the Facebook brand?

Once again, would your answer change if your kids were in the car?

Sandy writes on behalf of Livewired, a PR company that specialises in all aspects of public relations, including branding, event management and crisis communications.