Last year has all been about the most powerful phone available in the market with each company trying to outdo each other. So it wasn’t a very surprise when the same trend followed through in this year’s CES (Consumer Electronics Show). With each manufacturer showing off what new hardware they were able to pack into their smartphone. Here is a list of the top android phones of 2012! 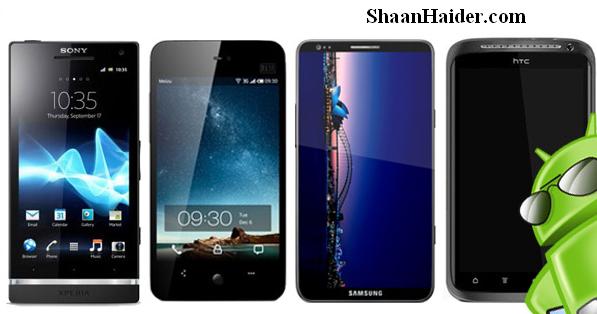 HTC has been a big competitor in the smartphone market and 2012 seems like it won’t be any different as HTC are planning to release the HTC Edge a quad core smartphone. Running on NVIDIA`s Tegra 3 processor (Four cores) as well as a companion core that will allow for small tasks to run without overclocking the phone. The phone is clocked in at an impressive 1.5GHz which will allow this phone to be able to deal with everything that you can throw at it.

The battery life of the HTC Edge will be quite impressive too as it will stand to be twice of that of any HTC smartphone. Other specs include a 1GB RAM, 4.7 inch screen 720p resolution (HD) and 32GB of internal memory, an 8 megapixel camera which will shoot 1080p HD video and Android Ice Cream Sandwich. All in all the HTC Edge looks like it will definitely be a competitor for the most wanted smartphone. And with HTC being the manufacturer you know that the Android OS will be greatly tweaked and modify for that HTC feel that we know and love.

Motorola has really rebranded itself in the past couple of years as the go to company for the cutting edge in design for Android smartphones. And it seems like that is exactly the same theme they are going for in 2012. With the Motorola Bullet, Motorola is aiming to have the most design oriented smartphones on the market. Unlike there competitors Motorola has always had the emphases of there smartphones on design. And the Motorola Bullet is no different a candy bar style 4.3 inch screen with a quad core NVIDIA Tegra 3 processor. Other specs include a 12 Megapixel camera, 1.6GHz RAM and 16 GB of internal storage. The brother to this device the Motorola Jet will also have a slide out keyboard.

Sony Ericsson has had a very difficult year which is why late last year Sony acquired the brand completely. Which is why from now onwards all Sony Ericsson smartphones will be Sony smartphones. Which is why to rebuild their image Sony has completely redesigned the Xperia smartphone line-up. The classic lines that you remember are now gone for a less is more Apple-esc style. Which is a big improvement over the older design lines. But the biggest difference in the old Ericsson Xperia line-up to the new Sony line-up is of the hardware. Ericsson never paid enough attention to the hardware specs of the device which is why the Xperia phones always felt behind the curve. With the Sony Xperia S, Sony is still creating a breath taking phone but for the first time giving the phone specs to match its looks.

The Sony Xperia S will have a dual core 1.5 GHz Snapdragon processor. A gorgeous Bravi4.2 inch HD screen, 1GB of RAM and 32GB of internal storage topped off with mind numbing 12 Megapixel Camera all in one of the slimmest Android smartphones yet. This phone is proof that Sony is taking its smartphones very seriously.

Samsung has been on a roll all of 2011 with its massive sales with devices like the Samsung Galaxy S II and Galaxy Note. All this immense success has made Samsung the number one manufacturer of Android smartphones. Which led Google to make the next Nexus, the Nexus S with Samsung. Showing the world what the latest Android interface 4.0 (Ice Cream Sandwich). Which is why in 2012 there is a lot of pressure on Samsung to deliver the same level of excellence customers have come to expect from Samsung. That is why the Samsung Galaxy S III is being delayed as to make sure it’s a complete product.

The specs are reportedly 2GB of RAM a Samsung clear touch 4.6 inch screen, a 12 Megapixel camera topped off with a quad core 1.5Ghz processor ( reportedly Samsung’s own Exynos line of chips). All neatly packed in a body that is less than 9mm thin. With all this you can expect the Samsung Galaxy S III to be another success story for Samsung.

All in all the future of Android smartphones in 2012 looks bright with each manufacturer bring devices that are better, faster, and smarter.